Special Cases: The story of Cooper: Trials, trouble and triumph 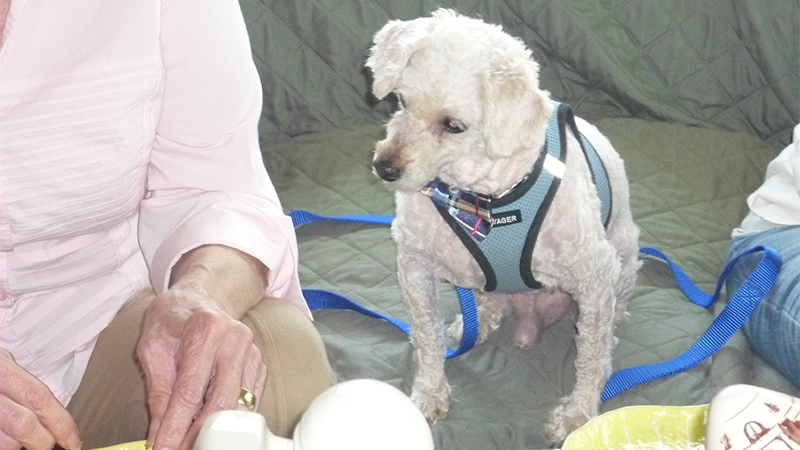 It seems like nearly two years ago when I first had Cooper as one of my kids. He is the cutest little white miniature Poodle you’ll ever meet. His cuteness and playful demeanor made it hard for me to believe that Cooper (he was then a 7-year-old) was needing his third home.

Cooper is mouthy when he plays and is quick to snap at someone if he is uncomfortable or threatened. So, after two more trial homes, it was deemed that Cooper must be in an only dog family.

In my initial tale I told how I held the little fella and played rough with him. Though he mouthed me, he indulged in the game with tail-wagging joy. Not only was I concerned for the little guy, I had grown to really love him.

A consensus was reached that for Cooper’s sake a quiet one-on-one situation would be optimal.

Enter Parky Flanagan, a friend and part time volunteer to the FHS shelter. I was elated when I learned this sweet lady with the eternal smile adopted Cooper. Parky was not only a friend but a supporter to Lennie’s Kids. The relationship was perfect and for quite a while each enjoyed filling the needs of the other. Whenever I ran into Parky she would never miss the opportunity to tell me how Cooper was doing.

Then as fate would have it, the unthinkable happened and we lost Parky to the Lord. All involved were saddened, not only for the loss of a friend, but for the heart of little Cooper, who was nearing 10 years old.

Frantic staff at FHS were out of ideas for Cooper so they called on Verna Wilkins, owner of the Forever Dream Sanctuary. Verna, who at any one time will have anywhere between 25 and 35 older dogs in her sanctuary, agreed to take on Cooper. I whole heartedly support this sanctuary and to this day one of my great joys is to visit Verna and her group.

Cooper adapted to the group in no time; my dear friend Verna is a wizard with these precious kids.

On Easter Sunday I was invited to lunch at Larkin’s by two great friends and supporters, Bert and Jeanette Larson. Jeanette is on the board of directors of Lennie’s Kids 501(c)3.

After brunch we were invited back to the Larson household to meet up on a planned visit by Verna and none other than little Cooper. Recently the Larsons had lost Kiki, their toy poodle, who, if you ever visited, you’d find tucked safely on Bert’s lap. I had the privilege of being one of the few people that Bert would share Kiki with and though toward the end she had lost her teeth, her hearing and her sight, she knew when Uncle Lennie was holding her.

The visit with Verna and Cooper could have been written in a movie script. There was so much love in that room I thought my heart would burst. The only concern was how Cooper would react with all of the other animals (16 cats and three dogs). Verna left later that day and of course Cooper stayed behind as the newest member of the Larson menagerie.

Later that evening I received a message from Jeanette. “Leonard, he is so cute and he follows Bert all around. When Bert went to bed I checked on Cooper, he was laying there tucked in Bert’s arms. When I entered, Cooper lifted his head and I saw a wonderful smile of thanks and gratitude on his face.”

Another reminder, on May 21 there will be another Gala for Lennie’s Kids featuring the Rescue Rally. Call 828-859-5835 for information. There are many Coopers out there and not enough Vernas and Jeanettes. Please help us do what we can.