Davis’ attorney responds to details in the indictment against client 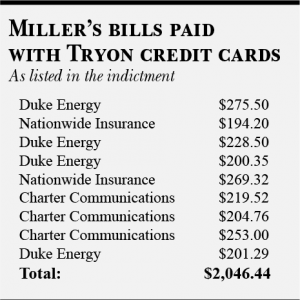 Lia Bantavani with the U.S. Attorney’s Office said Miller and Davis were both released on unsecured personal appearance bonds on Wednesday. Their conditions included that the two were to have no contact with one another, or with the mayor, other town council members or the town manager, except at official meetings.

The next trial date was set for June 19 before Judge Reidinger, Batavani said.

On the conspiracy charge, the eight-page indictment handed down by the federal court says that the defendants did embezzle, obtain by fraud and otherwise knowingly convert to the use of any person other than the rightful owner, and intentionally misapplied, property owned by the Town of Tryon.

“It was further part of the conspiracy that the defendant Leroy Miller Jr. would obtain cash payments from the defendant Joseph Samuel Davis in exchange for Miller’s abuse of his position as a Town of Tryon Council member in assisting Davis in obtaining and retaining the position of interim town manager and of permanent town manager, with an increase in salary of more than $5,000 per year paid by the Town of Tryon,” states the indictment.

Davis’ attorney Stephen Lindsay told the Bulletin Thursday there is a discrepancy about how much money was actually paid to Miller’s personal bills. Lindsay said his records show the fire department also had a Charter Communications bill and investigators inadvertently lumped those in as well for 2-3 months, so the actual amount paid to Miller was in reality $1,600-$1,700.

Lindsay also disputes details regarding Davis’ conspiracy charge. The indictment states that Davis received an increase in his salary of more than $5,000 per year while he served as interim and permanent town manager while also serving as fire chief, indicating that Miller and Davis conspired for Davis to give Miller personal money while Miller advocated on Davis’ behalf as town commissioner to get him those raises.

Lindsay said Davis did not receive a $5,000 raise every year.

Lindsay said when the town decided to split the manager and fire chief positions, Davis’ salary was changed to reflect only doing one job instead of the previous two jobs. While Davis was manager as well, Lindsay said Davis was also accumulating vacation and sick leave, which were benefits he earned as manager.

The indictment indicates that Davis sent Miller an email asking for payment of those accrued benefits.

“Not only did that email go to Miller,” Lindsay said, “but also to all council members. It had nothing to do with a tit for tat. It simply had to do with the fact that by giving up this (manager) job, could you at least make sure I get the benefits I accrued.”

Lindsay said during the trial he will produce those emails and prove the $5,000 in question had nothing at all to do with a pay raise, but in fact was benefits Davis accrued while serving as town manager.

“He didn’t receive a $5,000 raise every year,” Lindsay said. “He only received additional pay when he became town manager because he did two jobs.”

During Wednesday’s first appearance, the U.S. attorney prosecuting the case told Judge Dennis Howell that Davis had been cooperative in aiding the investigators by turning over text messages he saved from conversations with Miller. It was also confirmed during the first appearance that Davis wore a wire for investigators on two occasions for additional evidence against Miller.

On or about Jan. 25, 2017, Davis met with Miller again and informed Miller that the FBI as well as the SBI had contacted him and Miller told Davis several times to inform the FBI and SBI that Davis made the payments out of the “needy fund” and that he thought the money would be reimbursed, according to the indictment. When Davis told Miller he had things on his phone, Miller told Davis he should have them taken off, states the indictment.

“Miller told Davis that he needed ‘to wipe that s— clean,’” states the indictment.

“Miller said that his (Miller’s) phone had ‘burnt up’ and that Davis needed to get rid of everything and ‘should never hold on to that s—.’”

Lindsay said Davis felt pressured to help Miller and that Davis felt threatened that he would lose his job if he didn’t help the commissioner by using the town’s credit card to pay Miller’s bills when he was asked for money. Lindsay also said Davis had gone to other town officials about the pressure from Miller but no one wanted to address the issue.

Lindsay did not say who Davis went to, but said he thinks that will come out during the trial.

“Violating the trust of the public deserves swift and sure action by prosecutive authorities,” said U.S. Attorney Rose on Wednesday. “Today, on behalf of the citizens of Tryon, my office responded with an indictment against these two individuals who egregiously abused the trust bestowed upon them by the people.”

Miller chose a court appointed attorney and is being represented by Freddilynn Sisson.

The Bulletin contacted Miller for a response but had not heard back from him by press time.