As our recent changeling, Bub, has recovered fully from his attack by the other enormous orange (now nicknamed, ‘The Big Ginger, or Ging, for short) tom, we debated over letting him outside, supervised, as he has been gazing dejectedly out the windows at our other cats, all sunning themselves on the front porch before coming back in after breakfast and inspecting their food dishes for the 14th time on the off chance that they have been magically refilled before 5 p.m.

It had been difficult to explain to a former feral cat why he cannot return to his life as a free range feline while he sees the other cats having a wander through the rose beds and stretching luxuriously in the tender green spring grass.

“It’s for your own good,” I said to Bub, having to push him away from his attempt to escape through the front door as I tried to leave. “You’re just now completely recovered and the upstairs back deck is open. You can go hang out up there.”

Bub looked at me and though I didn’t hear it, I’m quite sure he sighed as he simply flopped over on his side and continued to stare out the storm door.

A couple of days later I said to Paul, “He’s so depressed, let’s let him out for some sun. It doesn’t seem fair to keep him in when everyone else is out.”

Paul agreed and Bub was over the moon to have a sniff around the deck and able to express what was left of his manhood by having a wee against a fence post. Returning to the deck, I can only describe what happened next as something akin to a ‘B’ horror movie, in which Jason returns to sitting bolt upright after being shot, stabbed, thrown from a second story window and assumed deader than the healthcare bill.

Because suddenly, out of nowhere, appeared the Big Ging, who had clearly been in hiding, staking him out, and I stood helplessly, watching both cats leap off the side of the porch and disappear to the other side of the house.

Yelling for Paul, who was Skyping a business call overseas (but wouldn’t that have trumped the viral video of the gent who was explaining the North Korea conflict when his children and wife came charging in his home office if I’d come busting into Paul’s like Kramer in a Seinfeld episode, wearing only his boxers and tank top), I charged after them. 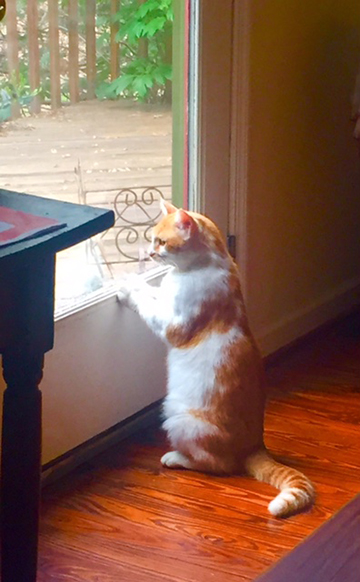 To my considerable surprise, I found both cats just around the corner, Bub staring down The Big Ging, although the other cat towered over him, both of their tails inflated, and yowling like something from the deepest pit of hell. Then, of course, our other cat, Buster, came to watch the action, but only from a safe distance of 10 feet, with a small tree in front of him for an escape route.

“Bub, STOP IT,” I ordered, and tried to get between them to scare the other cat away. Bub wasn’t having any of it and suddenly pounced at The Big Ging, who turned and fled through the woods, Bub on his heels, Buster offering an anemic sort of back up, me lying a distant fourth and Paul, who had joined in the altercation, stepping carefully through the briars and brambles of the woods in his preferred choice of flip flops as footwear.

We watched as they entered a clearing, and the Big Ging streaked across a neighbor’s lawn and back into the woods on the other side, down the bank towards the creek. Exhaling with relief, I saw Bub curiously mount the neighbor’s rather tall back deck to gaze after him and then realized he had only gone up there to get a better view of his target as he suddenly leapt down from the deck and charged across the lawn in renewed pursuit. Too winded to keep up, all I could hear was more yowling, a big splash, and finally, Bub reappearing to return home, soaking wet, bleeding from his ear and…triumphant.

Like a guy in a bar that steps into the line of a menacing drunk threatening a woman, sometimes you have to let a cat do what a cat’s gotta do. Scolding Bub all the way home as Paul grabbed Buster and ushered them both back into the house, I couldn’t really be angry at him nor could I wash off the expression of smug satisfaction as I tended to his ear and bathed him around the neck, finding a couple more scratches. He considers himself Bub the Brave, Bub the Bold but from now on, he’s Bub the Back Deck.