Leroy Miller, Jr., 51, and Joseph Samuel Davis, 42, both of Tryon were charged with federal program fraud conspiracy, according to Jill Westmoreland Rose, U.S. Attorney for the Western District of North Carolina.

A federal indictment was unsealed in U.S. District Court in Asheville Wednesday.

Miller was also charged with three additional counts, including federal program fraud, extortion under color of official right and witness tampering, according to the U.S. Attorney. The indictment was returned under seal by a federal grand jury sitting in Asheville on April 4 and remained under seal until Miller’s arrest Wednesday morning.

Davis was fired from his fire chief duties in January after it was discovered he used town credit cards to pay for some of Miller’s personal bills. 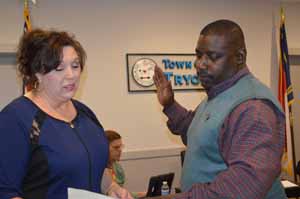 Roy Miller, right, is shown at his swearing in. (FILE PHOTO/Leah Justice)

Miller announced during the town’s March council meeting that he resigning as commissioner effective June 1.

“The indictment further alleges that during this time, Miller had the power to affect and influence appointments, including that of Davis as interim and permanent town manager,” states the U.S. Attorney’s Office.

The indictment says from at least April 2012, Miller began soliciting money from Davis and the two reached an agreement where Davis would pay some of Miller’s personal bills in exchange for Miller’s championing within the town council for Davis to receive a higher salary, among other things.

“Miller sometimes made his solicitations for money in person or by telephone,” states the attorney’s office, “and sometimes by text and email messages. The indictment alleges that from time to time, when he made these solicitations of money, Miller reminded Davis that Miller was in a position to help with the fire department with a budget increase, that he had the power to affect Davis’ appointment as town manager and his retention of that position, and that Miller had the power to affect Davis’ salary in both positions.”

In September 2016, Tryon’s new town manager would assume the post and as a result Davis would return to being solely the fire chief and his salary would be lowered, according to the indictment. On or about Oct. 21, 2016, Davis sent Miller a text message discussing the strategy and language that Miller should use in attempting to protest Davis’ salary, states the indictment.

“Miller responded a few minutes later, asking Davis to send him what Davis wanted him to say,” the U.S. Attorney said. “On the same day, Miller sent a text message to the new town manager stating that they need to meet to discuss a budget amendment about salaries, specifically to Joey Davis salary.”

Around Nov. 8, 2016, Miller sent a text message to Davis asking if he could possibly pay one utility bill, according to the release. On that same day, Davis told Miller via text message that he could not “run anything through the town anymore with (the new town manager) checking behind me on all my expenditures.”

In addition to obtaining payments of his personal bills using the town’s credit cards, Miller also solicited Davis to participate in a bill-padding and kickback scheme, according to allegations in the indictment.

“On or about March 23, 2016, a private contractor (“the contractor”) submitted a bid for construction work on municipal buildings of the town,” states the release. “Davis, as town manager, was responsible for choosing a contractor, and he approved the contract. As a town council member, Miller was aware of the contract. In May 2016, Miller asked Davis for $2,500, and suggested Davis inflate the contractor’s bill by that amount and give the extra money to Miller. Davis, however, did not inflate the contract, and Miller therefore received no money from this proposed scheme.”

Beginning in January 2017, according to the indictment, Davis told Miller that he had been contacted by the N.C. State Bureau of Investigation (SBI) regarding town funds being used to pay for Miller’s personal bills. Miller advised Davis not to say anything, according to the indictment, but that the money was from the town’s “needy fund” and that Davis anticipated the money would be repaid.

“Miller also advised Davis to get rid of his emails and text messages and to make sure that he did not ‘have a trail,” states the U.S. Attorney’s Office release. “Later that same month, the indictment alleges that Davis again met with Miller and told him that the FBI as well as the SBI had now contacted him and wanted to speak with him. Miller again told Davis several times during this meeting to inform the FBI and SBI that Davis made the payments out of the ‘needy fund’ and that he thought the money would be reimbursed. When Davis said that he had ‘things’ on his phone, Miller told him to wipe it clean.”

“The individuals arrested today are accused of stealing from the very system they were entrusted to support,” said Strong. “The FBI and our law enforcement partners will investigate those who pray on programs that provide essential services to our citizens for their personal gain.”

Schurmeirer said the public holds government officials to a high standard and when that public trust is broken, “we all suffer.”

“The SBI will continue to place a high priority on public corruption cases such as this one in Polk County, and we sincerely appreciate the diligent work of the U.S. Attorney’s Office in prosecuting this case.”

Davis is being represented by attorney Stephen Lindsay, who said Davis was not arrested Wednesday, but did surrender Wednesday morning for federal processing.

Lindsay said Wednesday afternoon, during the first appearance, Davis will enter a plea of not guilty and will request a jury trial.

Lindsay said in order for this to happen, there had to be an agreement and that’s what the conspiracy is all about.

“It’s sort of a sad situation,” Lindsay said. “How can you be both a victim of a crime and the criminal?”

Lindsay also said there is no issue at all that Joey did not receive a penny from this and he never expected to see a penny from any of this.

“(Davis) wasn’t looking to benefit anything,” Lindsay said. “He’d been threatened. He was very afraid of what could happen to him.”

Tryon Mayor Alan Peoples, when reached by phone Wednesday afternoon for comment, told the Bulletin, “We turned it over to the SBI, the SBI investigated and they have seen fit to issue indictments.”