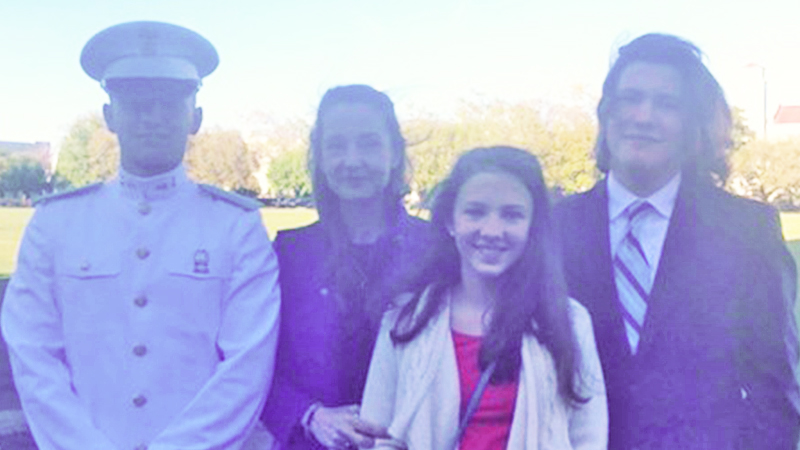 The Citadel Club of Charleston, in coordination with The Citadel Alumni Association, held the Annual Alumni Remembrance Muster to honor those members of The Citadel’s Long Grey Line who passed during the preceding calendar year. Thomas Olin Monts, III, who passed on October 14, 2016, was remembered during this event. Monts was a 1992 graduate of The Citadel, The Military College of South Carolina. He majored in business administration and was the owner of Allgood Logistics in Saluda, N.C.

The Muster Tradition is an annual coming together of all alumni of a military institution, with the purpose of recognizing those who have passed away during the preceding year. The organizer for this year’s Muster, B.T. Marking, Citadel Class of 1970, told those gathered that, “The Muster honors those who can no longer stand formation and the event creates a rallying point for alumni.”

For The Citadel, the Muster is always held during the weekend celebration of Corps Day, the birthday of The Citadel. The traditional format seeks to emulate the late alumni brethren standing in one last formation, answering the roll call one last time – then no more. On Sunday, March 19, current cadets stood on The Citadel’s Summerall Field and called the names of 224 departed individuals. As each name was announced, one current cadet in the formation responded on behalf of the departed individual, by stating, “Present for duty, Sir.” The cadet responding to Monts’ name was Jason Hough, Palmetto Battery, Class of 2020. As tradition goes, the direction of the Highest Authority then excuses the departed from further duty on the temporal front, with gratitude for all their good works and for all the lives they have touched. The departed are transferred, with immediate effect, to Headquarters, Celestial Command, where, we trust, their spirits will continue in eternal service.

Once the last name was read, The Citadel’s Living History Society rendered a 21-musket salute. All present stood in respect to those departed. Following the salute, Alumni and Cadet Companies were called to “Present Arms,” and all others placed their right hand over their hearts. Taps was then played, as is tradition to close a military Muster.

A reception dinner followed in the Regimental Commander’s Dining Room, overlooking the Ashley River. The guest speaker for the reception was John C. Warley, Jr., Citadel Class of 1967. Warley is a novelist and the award-winning author of “A Southern Girl.” Warley has also been intimately involved in the development of the new Citadel War Memorial to be unveiled this year. He spoke of the deep bonds formed at The Citadel, and how those bonds continue even after death. Warley was classmates and close friends with novelist Pat Conroy, Citadel Class of 1967, who was one of the 224 departed remembered during this year’s Muster.

While at The Citadel, Monts held rank as a Cadet 2nd Lieutenant, Sergeant and Corporal. His senior year, he was a member of The Summerall Guards, an elite drill team representing the esprit of the Corps that demonstrates the high ideals and standards of The Citadel.

Monts was also a member of the Wesley Foundation and played a variety of intramural sports, winning championships in water polo, softball and triathlon. Monts served three years on the Class Board of Directors, responsible for planning social events on and off campus.

Christopher Massa, Kilo Company classmate and fellow Summerall Guard, remembers Thomas as “a leader who served The Citadel well as a student and alumnus. Thomas was chosen by his classmates each year for the Board of Directors position. He had the unique ability to get people involved in social events and intramurals. As an alumni, he was able to rally fellow classmates to support the school, the alumni associations, and the Bulldog sports teams. He is one we respect.”

As an alumnus, Monts helped to organize class reunions and was a member of the western North Carolina Citadel Club. He led the effort in hosting The Citadel basketball team during the Southern Conference championship, held in Asheville, N.C. He served a term as this area’s club president, helping to raise scholarship funds so future students could attend The Citadel. Monts’ love and dedication to his alma mater was remembered on March 19 but will not soon be forgotten by his friends, family and fellow classmates.