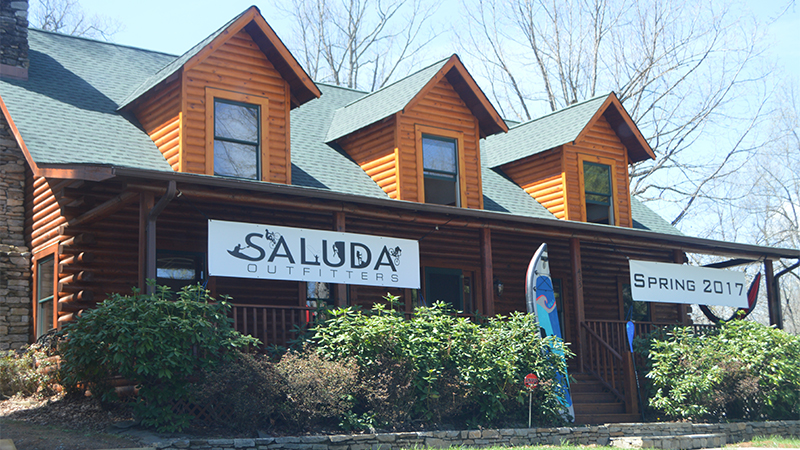 Saluda Outfitters, an outdoor gear and clothing store, will have a soft opening on April 15 followed by a grand opening on May 6. (Photo by Michael O’Hearn)

SALUDA – Outdoor enthusiasts will soon have a gear and clothing destination in Saluda when Saluda Outfitters holds a soft opening on April 15 followed by a grand opening on May 6.

The 3,600-square-foot former Southland Log Homes office building at 435 Main St. in Saluda is being renovated to fit entrepreneur Ryan Griffin’s dream of having a store for hiking, biking and kayaking lovers.

“I grew up in the mountains. I was a boy scout, hiked the Appalachian Trail and have done some trout fishing,” Griffin recounted. “I’ve always had a love of the outdoors since childhood. I’ve also been in and out of Saluda since I was 9 years old.”

Griffin said Saluda Outfitters aims to be more than just a small Recreational Equipment, Inc. (REI), one of the largest outdoor equipment and apparel store chains in the world.

“I don’t like comparing ourselves to REI because we will have more than just outdoor gear,” Griffin said. “We will have a small coffee and sandwich bar, craft beers and local artists will be featured here as well. Our store will concentrate on providing top-of-the-line outdoor apparel, footwear and equipment for the toughest of woodsmen to those shopping for upscale ladies apparel,” Griffin explained. “We will have a little something for everyone including children.”

Leaving the “corporate America” of Charlotte and coming to Saluda in 2014, Griffin  noticed the potential for an outdoor apparel store when he saw the concentration of outdoor activities in the area.

Susan Bigley will be managing the store from day to day and Griffin said he would hire one or two additional part-time staff. Chris Wing and Lydia Cardinal are also going to conduct their paddling and kayaking school business, H2O Dreams, from the Saluda Outfitters location.

Saluda Outfitters will hold its grand opening on May 6 from 10 a.m. to 8 p.m. featuring live music, giveaways and food. For more information on the business, visit saludaoutfitters.com or call 828-848-4060.

“Our goal is to serve the needs of the local community as well as the destination tourist in an adventure-centered atmosphere,” Griffin said. “In one section of the store you will find something for spending your day out-of-doors while in another section you will find something nice to wear to dinner at one of downtown Saluda’s superb restaurants.”