COLUMBUS – The suspect in a scam involving advertising at area Bi-Lo grocery stores has been identified and local police departments are seeking the public’s held locating him. 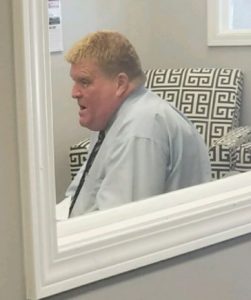 Bailey was accompanied by another person, who is described by a witness as a white male with red hair, medium build and approximately 5’8” in height, according to Arrowood.

The suspects are driving a black Honda Ridgeline with dark tinted windows, according to police reports.

The suspects are accused of selling advertisements for businesses to be placed in the windows of the Columbus and Landrum Bi-Lo stores.

Bailey is going around to businesses and using the name Scott or Thomas Bailey, according to Landrum Area Business Association members. Bailey is charging $275 or more to put advertisements in the window or on benches.

According to Bi-Lo representatives, advertising at the store has to be done through the store chain’s corporate office in Jacksonville, Fla.

Karolyn and Scott Hooper, who own Hoop’s Antiques in Tryon paid for an advertisement for $350 and signed a contract. The Hoopers said they were not made aware of the scam until Entegra Bank in Columbus cashed the check.

Several other businesses said they have been visited by Bailey and the other person.

The Columbus Police Department is also investigating Bailey in their jurisdiction.

The Tryon Police Department asks anyone who has information about this case or the whereabouts of Bailey to contact the police department. Arrowood said even if the subjects did not obtain any money, the police department is interested in pursuing the investigation for possible charges of attempted crimes.

Anyone with information can contact Lt. Theda Rickman at the Tryon Police Department at 828-859-9195.