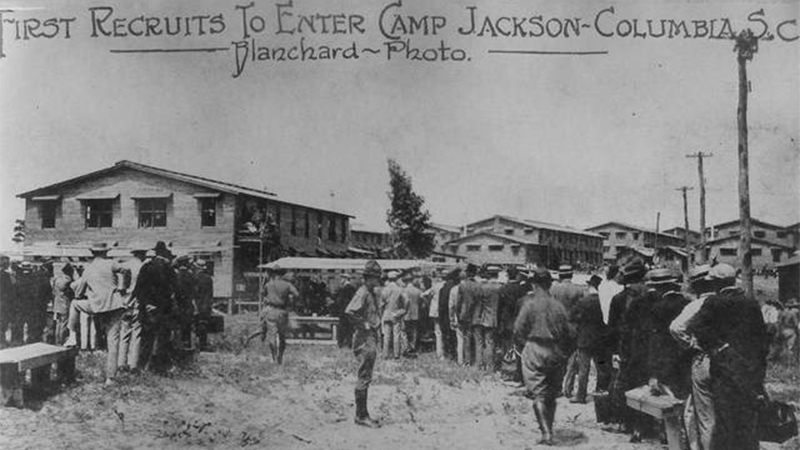 Editor’s Note: This is the first of a series of articles about soldiers whose names are on the Doughboy monument in Columbus.

Columbus Garrison Constant, an unmarried farmer who lived on Friendship Road in Saluda, was one of seven children of Govan Harrison Constant and Mary Angeline Case Constant, born December 5, 1891. He would become Polk County’s first casualty of  “The Great War.” 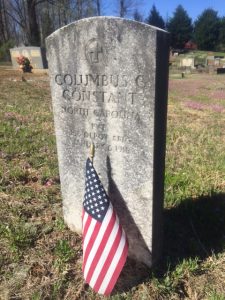 Columbus Constant was among the enthusiastic young men who signed up for the draft on the first national registration day, June 5, 1917. He was 25 years old, of medium height and build, with gray eyes and dark brown hair. He signed his registration card with an “x.” One of four recruits were illiterate and the Army tried to teach them the basics of reading and writing. One sergeant recalled that many of the men “…were not lacking in intelligence,” but came from areas “…where they didn’t have any schools to go to.”

On the day after Christmas 1917, Columbus Constant was inducted into the U.S. Army at Tryon.  He was sent to Camp Jackson, now Fort Jackson, near Columbia, S.C., where recruits were received and organized, provided with uniforms and equipment, and given initial training.

Almost immediately after he arrived at Camp Jackson, Private Constant found himself in the base hospital, sick with measles. Eight days later, at 4 p.m. on January 6, 1918, he died of a secondary infection, bronchial pneumonia.

Measles is a highly contagious airborne disease and no vaccine was available until 1963.

Nine of 10 people who are not immune will catch measles if they share a living space with an infected person. Recruits from rural areas frequently lacked immunity, and were especially vulnerable in the crowded military camps.

One North Carolina veteran recalled, “Do you know that we didn’t have any anesthetic, or any kind of medication to give the wounded, other than iodine and aspirin?” Antibiotics, used to treat pneumonia, did not become available until the 1940s. Many World War I deaths are attributed to pneumonia, but it was usually brought on by an illness: a bad cold, measles or the highly contagious and deadly “Spanish flu,” which attacked the respiratory system and struck down previously healthy young adults. There were 63,114 U.S. servicemen who died of disease in World War I, more than the 53,402 killed in combat.

On January 8, 1918, just 13  days after he joined the Army, Private Constant was buried in the cemetery at Friendship Baptist Church, near his family home, just east of Saluda. A soldier’s headstone marks his grave.