Special Cases: Where do I turn to next? 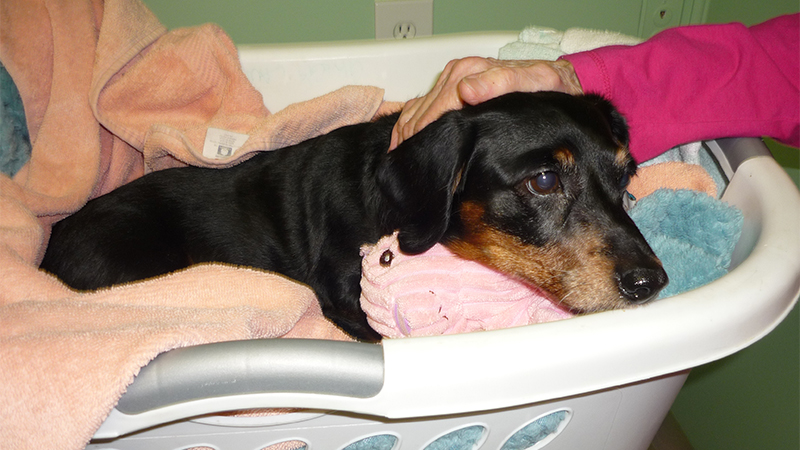 Coming out of church this week I was telling some of my supporters it seems whenever I’m a little low on my major case funds, the cases just pile on. I think it’s God’s way of telling me to just keep the faith. He hasn’t lost control.

One of my favorite blessed Mother Theresa’s quotes is, “I know God only gives me as much as I can handle, I only wish He wouldn’t trust me so much.”

Jackie Hanfman, a dear friend and supporter, told me of the 9-year-old Dachshund who was struck by a car, suffered a broken leg and pelvis, and needed help. I told her I had just met the dog at Landrum Vet and explained I didn’t have the funds to take on a case this big.

The next morning at breakfast I told Chuck Davis, my breakfast partner, about Destiny.

That evening, I brought the check to Jackie at her work at Hare and Hound in Landrum. I mostly know Jackie from church and her volunteer work at Pet Tender Angels. Also, her husband Richard is a fellow Knight of Columbus.

Many things that I intended to write of occurred but I will cut to the chase. Dr. Keith Allen called on Monday.

“Lennie, this animal is beat up pretty bad, it would be $3,500 to fix the leg. The rest could heal on its own but it would take some special care. I’ve had previous dealings with these people. I’ll do what you ask but I don’t want anyone to take advantage of you.”

We both agreed it truly would be best for Destiny to be humanely put to sleep.

Also pending now, I have the case of Dax, the autistic boy’s therapy Shepherd. I’m praying that outcome is much more positive than poor little Destiny. I’ll keep you all informed as things develop.

Wouldn’t it be wonderful if good intentions were all that was needed to help my precious kids?

Okay, mark your calendars. At Tryon Estates on May 21 from 4-8 p.m. will be my 10th annual gala and second animal rescue rally. Flyers are being passed out as we speak; if you’ve never attended, don’t miss it! There are many ways to get tickets. I’ll give out information in the future, but for now, my number is 828-859-5835.

I feel fine but my cardiologist says I had a silent heart attack and there’s some sort of blockage which will be taken care of soon. After that, my fourth bladder tumor has arisen. My urologist says to take care of the heart first.

The answer to where I turn next is in the Boss’ hands, and all His angels.

Thanks for always being there and thanks for listening.