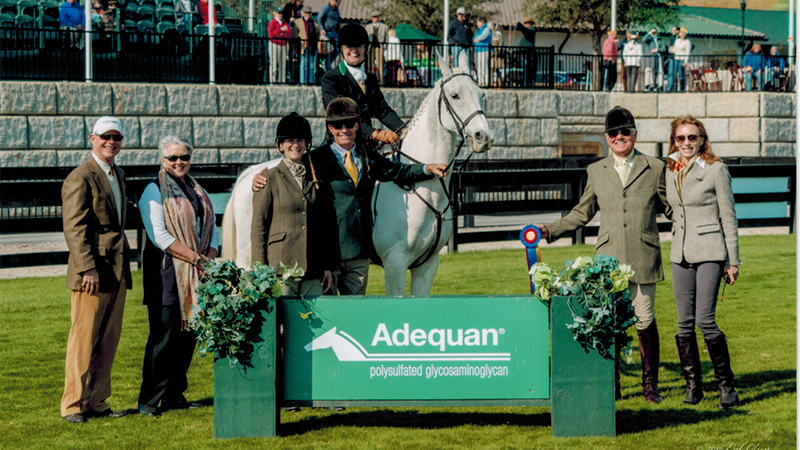 Tryon resident Jana Hinely and her longtime partner Calli made the hometown crowd proud by winning the tough Appointments Class during the inaugural Festival of the Hunt held at Tryon International Equestrian Center this past November. “Appointments” refers to all the little details on how traditional foxhunters are to be dressed and equipped, as well as how their horses should be groomed and tacked up.

The Appointments Class took place on the final, Championship day of the five-day festival. The finals were preceded by a Welcome Hunt on Tuesday and judged hunts on Wednesday, Thursday and Friday, across either Green Creek Hounds or Tryon Hounds country, and led alternatively by the Green Creek Hounds, Tryon Hounds, and the visiting Shakerag Hounds of Georgia.

Riding as judges among the hunt participants on the three judged days were local foxhunters Roger Smith and Thomas Cadier, both of Green Creek Hounds, along with Snowden Clarke from Middleburg, Va., and Linden Wiesman Ryan from Blue Ridge, Va. who is not just a foxhunter but a Bronze Medalist with the U.S. Eventing Team at the 2000 Olympics. 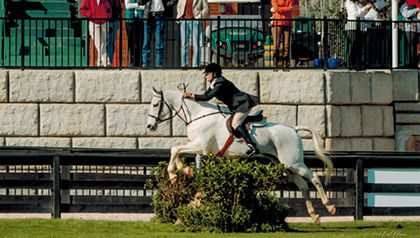 Going over a coop with brush during the Field Hunter Championships.

“The judges rode with us to watch the horses’ manners, how they jumped, and how they acted around the hounds,” says Jana, who rides with the Green Creek Hounds. “There was also an award each day for ‘Best Turn Out,’ which meant you had to wear all the correct clothes each day.” Something Jana thought would be a challenge – getting brown field boots – she actually found in the correct size and for a bargain price at Re-Ride.

After the three days of judged hunting, Jana and Calli were among the pairs chosen to compete in the Field Hunter Championships, which took place in TIEC’s Derby Field. The Appointments Class was held before the championship rounds were ridden.

Of course both horse and rider had to be correctly “appointed,” which included among other things, a sewn-in bridle with a Pelham bit, no saddle pad, a leather girth and old-fashioned stirrups with no stirrup pads. Horses had to have braided manes and tails, with a prescribed number of braids in the mane.

Jana had to carry a silver flask with sherry in it and have a traditional sandwich box attached to her saddle, complete with traditional sandwich. Jana’s was thinly sliced chicken on white bread with butter, halved in triangles with crusts cut off. And not only did the judges unwrap it to check it, one actually took a bite. 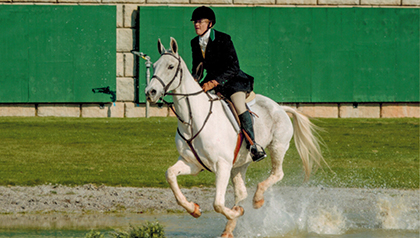 Galloping through the water obstacle during the Finals.

The results of the Appointments Class weren’t announced until the end of the entire competition, which meant Jana and the other finalists had to quickly switch tack into something more modern and safer for the jumping rounds.

“We had to jump in a group around an outside course, and then the final six had to jump individually. Halfway through that second round you had to stop, open a gate while mounted, dismount and lead the horse through, shut the gate, then lead the horse to a log and line the horse up to remount, all while carrying your hunt whip.”

When the placings were announced, Jana had come in fifth out of nine competitors for the overall Field Hunter Championship, and was thrilled to hear her name announced as the Appointments winner. “I had done a lot of research on the various traditions because that’s what the judges were basing their scores on,” Jana said. “And there were some really great competitors, including a rider in top hat and tails.”