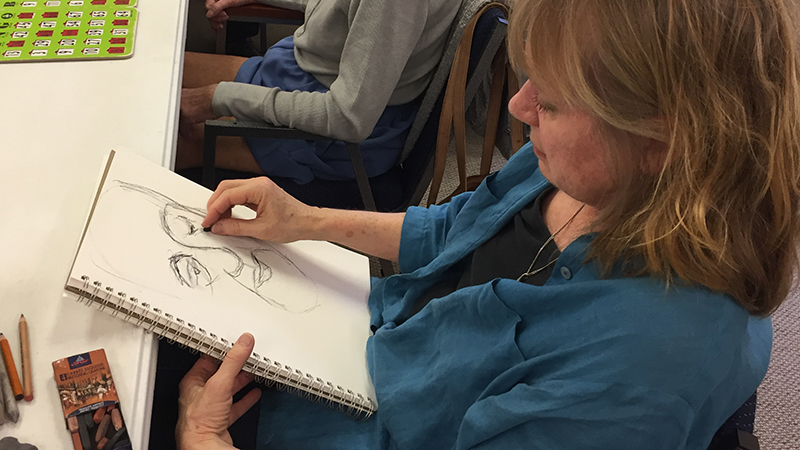 When Janet Orselli draws the portrait of a senior citizen playing BINGO at The Meeting Place Senior Center just outside of Columbus, there is more attention given to hearing the letters and numbers being called out than to the image she is creating. Actually, the subjects of her work pretty much just ignore her. 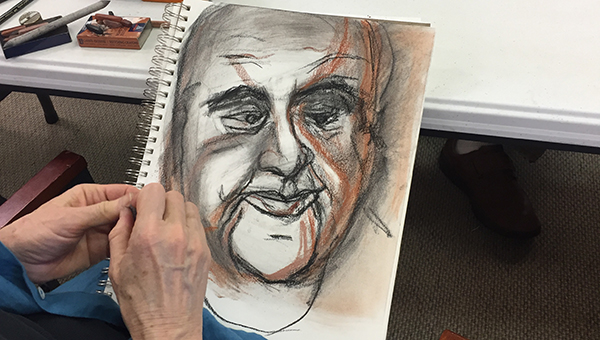 “B-13,” is called out loud and clear, and old eyes and hands scan the oversized cards. If a player has a B-13, he or she slides the red-tinted plastic window closed and hopes that eventually there will be a winning row of numbers. Janet glances up at her subject and down at her drawing paper repeatedly as she sketches. She uses artists charcoal sticks to quickly render the deep wrinkles, the sagging skin, the age spots, the thinning hair.

“BINGO,” someone says in a loud voice, and the game is over. There are no prizes, just bragging rights, but it keeps the mind humming along and everyone has the opportunity to socialize. A new game will

start as soon as everyone opens their windows.

The models don’t move all that much, so Janet is able to continue her portrait work as the gamers play game after game. She might spend most of the time on one portrait; she might draw several. It all depends on whether or not she is capturing what she calls “individual essence, an internal light.” And when she does capture that essence, that internal light, the portrait tells a story of a life well lived.

“I love faces and what they reveal,” the artist wrote in a statement. “I love the capacity of the face to hold an infinite amount of expressions. I love the attempt to capture a momentary individual essence and discover the person being drawn. I love the character inherent in a well-lived face. I love when the act of drawing becomes a meditative process allowing me to connect mind, body and emotion to reach something beyond what I expect or know. Although many of the faces are of those that could be labeled ‘seniors’ — their age is not important. The faces are all of people generous in spirit that have allowed me to spend time with them. Through this process I have come to know myself better and see how connected we all are. I am very grateful!” 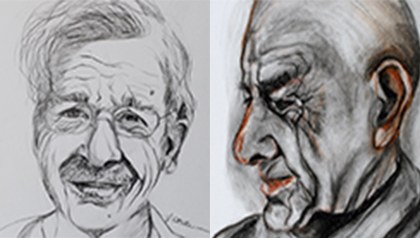 In a culture obsessed with youth, Orselli’s portraits instead focus on character, strength, vitality, joy, persistance and purpose. 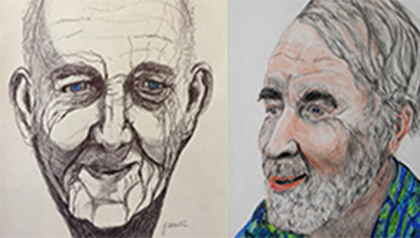 For the past few months, as part of a grant-funded project, Janet has been drawing the portraits of the elderly at The Meeting Place and her mother’s home, Ridge Rest Assisted Living. The end result will be a public art exhibit of her work at the Tryon Depot Room, weekdays, April 7-30.

Janet was one of several North Carolina artists chosen to receive funding from The Arts Council of Henderson County, in collaboration with the Transylvania Community Arts Council, and the Tryon Fine Arts Center in Polk County. These $1,000 or less grants were awarded to artists planning projects that have artistic merit and promise to advance the career of the artist or collaborating group. Janet used the money to buy supplies. The exhibit will open with a free and public reception on Friday, April 7, 5-8 p.m.

“I hope that people viewing the exhibit will experience the qualities of character, strength, vitality, joy, persistence or purpose in a well-lived face,” she said. “In our culture, which is so obsessed with the young – the power and wisdom of age is rarely recognized or valued. I hope that people can see and appreciate those unseen qualities through this project. Much of my inspiration originates from being a student at Adawehi in Columbus, N.C. where I live amongst a group of people who inspire me to look deeper for the beauty that is frequently overlooked. I desire that people not be tied to searching for likenesses, but be open to being surprised and have fun looking for themselves or others like in a ‘personger’ hunt. All the works will be titled the same, (Luminary, with a number) to signify that everyone is connected – yet also thankfully unique in expression.”

Oddly, drawing portraits is not what Janet normally does. Normally, she creates installations of found objects, meaning she finds all sorts of often-seemingly useless stuff and arranges it artfully in a gallery. She has a master’s degree in fine art from Clemson University and has been an artist in residence at Anderson Ranch in Colorado; Spring Island, S.C.; and Kaiserslautern, Germany.

She has received many grants and was awarded a national Pollock-Krasner Foundation Fellowship in 2005. She has had large-scale mixed-media installations in major museums in Charleston, New York City, Chicago, Montana, Indiana State and Florida State University.

But living in Adawehi, “a place for health and healing,” and leading Akula Foundation Reminiscence Groups for the elderly has pointed her in a different artistic direction.

“I am currently furthering my development by setting off in a new artistic direction,” she said. “Until more recently I focused predominantly on three-dimensional work – assemblage and mixed media installations. Change has been knocking at my door, and this past year I finally answered the door. I am excitedly drawing once more – seeking to capture an individual essence, an internal light in portrait form.”

She readily admits she is not totally confident with her new direction and is unable to label her work in ways such as “abstract,” “realism,” or “impressionism.”

“I think of my work as being as original as I can be,” she said. “What comes natural to me. Not intent to capture likeness, but to be authentic. To capture the moment. To let the drawing tell me where to go. I don’t know when I start where the art will go. I like the excitement of the process. I’m not good at being perfect, but I am flexible to what comes, and sometimes that is better than anything I could have imagined.”

Charley Pittman, 71, of Pea Ridge, didn’t yell “BINGO” the day that Janet drew his portrait. He agreed to let her draw him, but he paid her no mind, as she sat across the table from him drawing page after page of sketches. “I like what she is doing,” he said in between games. “It doesn’t bother me. I hope it helps her out in the long run, in her career. I admire anybody who can do that kind of work,” said the retired fiberglass worker. “They (his wife and other seniors) like the way she does,” he added, however, Charley had yet to take notice of his portrait.

A new game was about to begin, and Janet was ready…