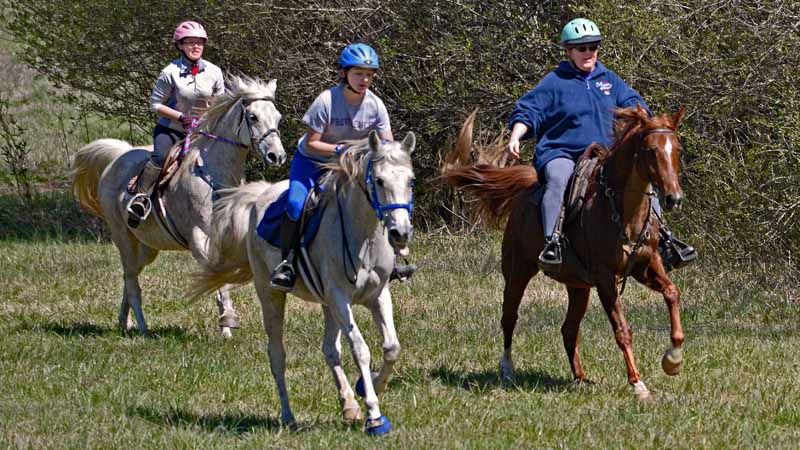 What a beautiful day for the Green Creek Hounds Spring Hunter Pace on John Watson Road! The day started off a little on the cool side, but warmed up so riders could shed the heavy outerwear. As riders were coming in off the trails, many were asked how the trails were. The response was unanimous that the trails were wonderful! Trails had wound through wooded areas and along open fields often giving some spectacular views. The view from the hilltop at the half way point was definitely found to be photo worthy!

Kem Ketcham was in charge of the tables, chairs, and tents. DJ Jeffries was in charge of the set up. Registration was at the tree line in the shade with Shelley Alexander, Jana Hinley, Ginny Howard, Donna Monagle, and Jean Wright keeping everyone on the straight and narrow with the required paperwork and assigning rider and team numbers. Next to the registration tent was the come hither tent with the T-shirts, sweatshirts, and ball caps. The new blue long sleeve T-shirt was very pretty! Thanks to Kathy Nebel and Joan McIntyre for showing these items and more than happy to take ones money! Decorations were lovingly put up by Stephanie Schulte. 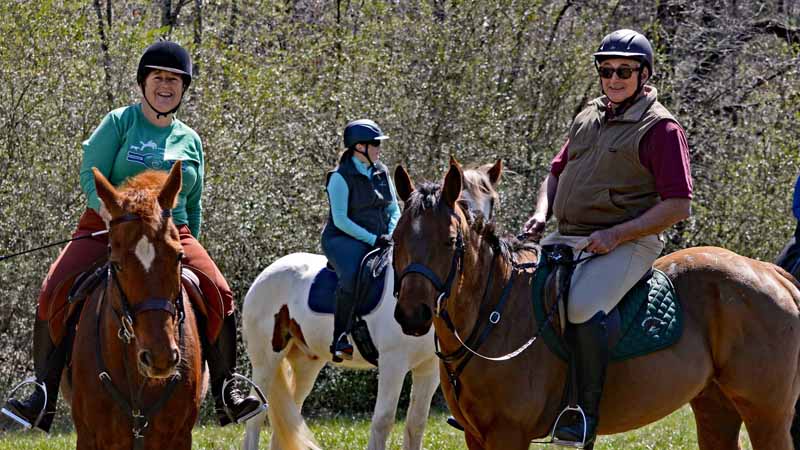 Anne and Richard Pierce are ready to hit the trails for a great ride at the Green Creek Hounds Spring Hunter Pace and Trail Ride held Sunday, March 19. (Photos by Lou Smith)

It took a team of outstanding gentlemen to park all of the rigs in the pasture. Christiaan Barendsen, Chris Hendricks, Marc James, Paul Nordan, and Chris Monagle were on hand to insure drivers parked the rigs with plenty of room in between to allow mounts to graze.

The trails were beautifully planned and prepped by Christie Fowler and Janet Cummings. The ribbons were hung on the trees with care and the arrow signs pointed riders in the right direction thanks to Deborah Bundy.

The landowner hosts are Jennifer and Roger Smith. Riders are very fortunate to have such a wonderful area to ride. Marion Connor was the Chairman and Harold Pfeiffer handled the ATV like a pro!

A lunch of freshly grilled hotdogs was set up under another tent or two next to the registration and clothing tables. Ann Fratcher, Wes Moore, and Jim Sumrell did a wonderful job preparing and serving the hotdogs with chili and condiments, along with homemade coleslaw, potato salad and pasta salad. All the accoutrements were available for such a wonderful lunch. Choices of chips were made available and in the coolers were a variety of sodas and plenty of water.

The trail was 8.5 miles. Most of the trails were wide enough to ride two and three abreast. Although the paces have ridden some of these trails before, there were new sections added and other changes making for a wonderful new feel. There were no creek crossings this time as the weather had probably dried them up a tad.

These trails took riders and their mounts through the woods, out into beautiful fields, and up the hills to welcome a panoramic view of the surrounding area. This was one of the grand photo ops available. Right near this picture-taking venue was the checkpoint. Here waiting were, Paul and Seuss Frazer, or Ann and Jim Troppman with icy cold water or apple juice for the riders. After the three-minute wait time, riders were sent on their way to continue their ride. There were plenty of jumps available for one’s enjoyment.

Joey Cabaniss was the timer extraordinaire for this Hunter Place. He’ll always leave the light on for you! Carol Parker was his sidekick for the day!

There turnout was very nice considering there were several other equine events happening the same day. There were 94 riders in 49 teams. 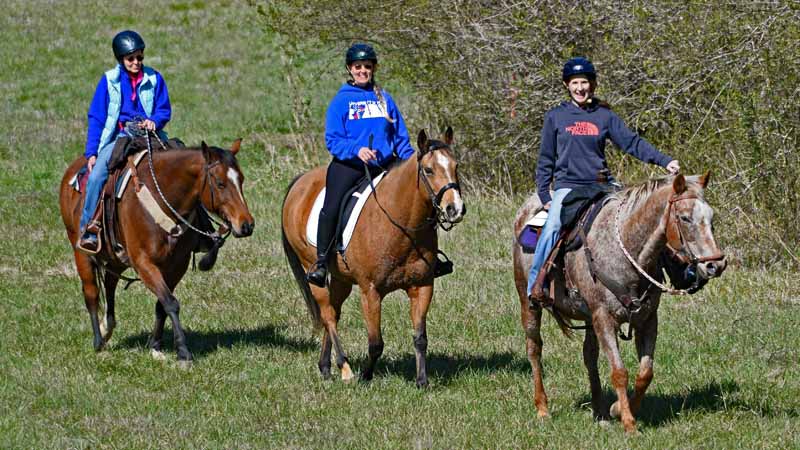 The Optimum Time for the Field Hunter division was one hour, 30 minutes, 11 seconds. There were a total of 41 riders in 20 teams.

First place in the Field Hunter division were the trio from Tennessee: Angela and Caleigh Reichardt from Jonesborough and Rachel Turner from Elizabethton with a time just 14 seconds off the Optimum time with their time being one hour, 29 minutes, 57 seconds! Second place honors are awarded to Hannah Bowers and Brittany Whitmire from Brevard with a time of one hour, 29 minutes, four seconds. The third place yellow ribbon was awarded to the trio of Amanda Aiello from Ellenboro and Nicola Deines and Pam Hilsman from Landrum with a time of one hour, 24 minutes, 26 seconds.

There were 53 riders in 29 teams in the Trail Rider Division. The Calculated Optimum time was one hour, 58 minutes, 44 seconds. 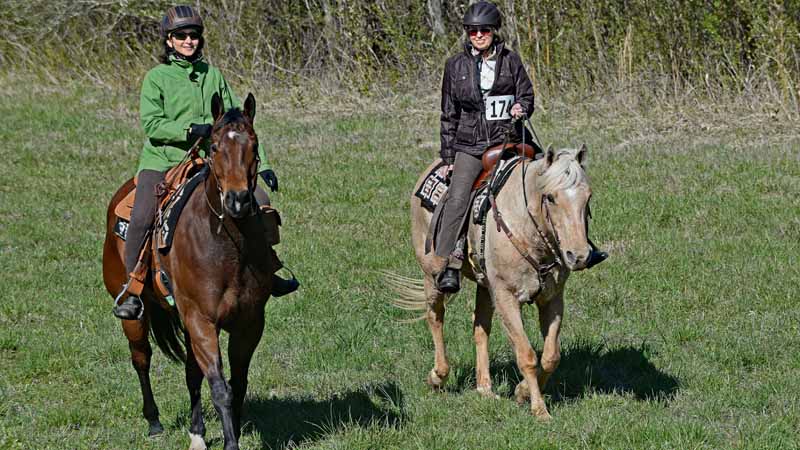 Up next for the 2016-2017 Hunter Pace Series is the Tryon Hounds Spring Hunter Pace and Trail Ride on April 2, 2017 at Long Shadows Farm. The rain date will be on Sunday, April 9.

Check in often at www.wchpace.org for upcoming events, changes, and classifieds. You can also view your photos taken by photographer Lou Smith.

See you on those beautiful trails!

After 11 of the 15 scheduled events of the 2016-17 Western Carolina Hunter Pace & Trail Ride Series, ties split while others resettle or continue as placements continue shifting, leaving the current standings as follows:

Last, but certainly not least, with one series point each at this time we have Maggie Coombs, Alison Harp, Marianne Moore, and JoAnn Trull.

Lynn Fitch has eighth with an accumulation of 30 points at this writing. Susan Haslam and Debbie Knebel are tied in ninth place with 28 points earned apiece. Arlene Lulavage is in tenth with 27 series points earned to date.

Natalie Hyatt, Lori Kunkel, and Sydney Swenson have an accumulation of 17 series Points apiece. Erin Fletcher and Forrest Samuels have each earned 15 points to date. Carrie Wilsey has earned 14 series points at this writing. Joanna Cromartie, Cordelia Gaupo, Cindy James, and Emma Lane each have 13 series points at this time. Susannah Francis and Evie Good have a current accumulation of 12 points apiece.

After these last four events, we will close the series for the season with our Year End Gathering and Awards in late June, so be sure to check the schedule and come play with us!

Thank you to our photographer, Lou Smith, for being at every event to capture the riders and their mounts as they fly over jumps, canter through the fields and enjoy the beautiful area trails. Hit “Store” on the website to view the pictures and scroll thru the list on the left to find the album you want to check next. If you like, you can place an order online.

For information on the Western Carolina Hunter Pace & Trail Ride Series contact Series Coordinator Jan Smith at WCHPace@Windstream.net or through the website at Jan@WCHPace.org or call 828-894-8760.