The Blue Star Memorial Program began with the planting  of 8,000 dogwood trees by the New Jersey Council of Garden Clubs in 1944 as a living memorial to veterans of World War II.  In 1945, the National Council of State Garden Clubs (now the National Garden Club, Inc.) adopted this program and began a Blue Star Highway system that covers thousands of miles across the continental United States, Alaska and Hawaii.  A large metal Blue Star Memorial Highway Marker was placed at appropriate locations along the way.

Today the program has expanded to honor all men and women who had served, were serving or would serve in the armed services of the United States. 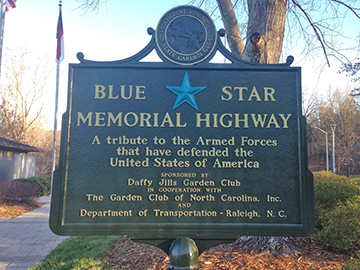 In September 1977, the Daffy Jills Garden Club had the honor of underwriting and dedicating a Blue Star Memorial Highway Marker in tribute to all members of the Armed Forces.  After almost 40 years, the marker still stands strong at the I-26 North Carolina Welcome Center. The sign was showing significant signs of age, and with the help of a professional restorer, a veteran himself, the sign has been restored to its original look.