TRYON – At a young age, hydrogeologist Jonathan Gerst played in the dirt and collected rocks, like many his age who enjoyed being in nature.

This evolved into a career, where Gerst has worked to protect the environment through his hydrogeologist services across the Southeast and around the world. 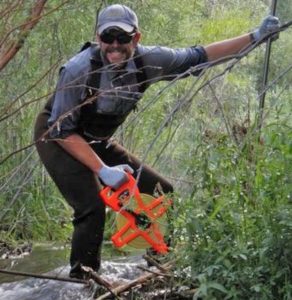 Local hydrogeologist Jonathan Gerst has taken his childhood passion for playing in the dirt and collecting rocks and turned it into a career protecting the environment, providing a wide array of services from water well inspections to regulation compliance around the Southeast. His company is Peak Hydrogeologic, PLLC located in Tryon. (Photo submitted by Jonathan Gerst)

“I’ve always had reinforcement from my grandparents and parents bolstering my love for going to rock quarries, on fossil trips or experiencing geology all over the world,” Gerst explained.

From there, he developed a love for the natural beauty of the Blue Ridge Mountains as he grew up in Simpsonville, S.C. During this time, he gained a “deep passion” for hydrogeology, the study of water underground or on the surface of the earth.

“As I was studying abroad in Germany with Appalachian State, it became something like committing to an idea and following through,” Gerst recalled. “I wanted to start my own business. I got that from my mom’s side of the family as my grandfather owned a mechanical engineering firm and my aunt has a chemical engineering company in Atlanta.”

Gerst received a bachelor’s degree in geology from Appalachian State. After he earned his master’s degree in hydrogeology at Virginia Tech, he and his wife Alexandra embarked on a two-year trip with the Peace Corps to Morocco to provide clean water.

He served as an environmental consultant and community development agent in Morocco and Suriname, but was discharged for medical reasons.

“I was honorably discharged after 11 months because I came down with E. coli,” Gerst explained about the gastrointestinal bacteria. “I was misdiagnosed three times as having ‘Peace Corps Syndrome’ because we were eight hours away from medical care. But after I lost 20 pounds in a month, I finally got in touch with an infectious doctor, nephrologist and urologist and they got me off whatever medications I was taking to mask the E. coli.”

As a hydrogeologist in Suriname, he recounted being in a “Wild West” setting where competition between mining companies and illegal miners dominated the landscape.

The couple now lives in Tryon with their two children, Karsten and Theisen. Gerst said his “nerdy-ness for hydrogeology” carried over with the names of his children, who are named after two equations in hydrogeology.

“The Karst equation has to deal with measuring the turbulent flow of water, like water rushing through a storm drain, and the Theis equation deals with laminar flow, which is small through coarse media, like water flowing through sand on the beach,” Gerst explained. “Think of it as the yin and yang of hydrogeology.”

“One of the things I think that sets me apart from other consultants is I have an interest in balancing economic prosperity with environmentally healthy solutions,” Gerst emphasized. “By that, I mean how do I appease the regulators while also helping the clients make sure there aren’t any threats to the environment?”

He has more than 10 years of experience throughout the Southeast and across the world doing environmental site assessments and regulatory maintenance.

When he is not inspecting water wells and the environment, Gerst enjoys rock climbing and paddling.  He believes there is still much to be explored in this world and beyond.

“I like to find adventure buddies and seize the day,” Gerst said. “I don’t like the idea of no more unexplored frontiers. If my son becomes an astronaut and takes us off to a new planet, that would be totally cool with me. I think a real life Star Wars would be awesome.”