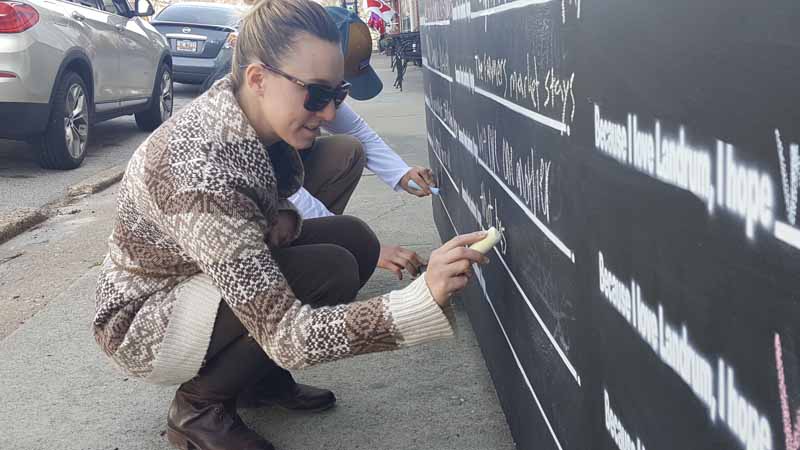 During the month of February, the City of Landrum placed chalkboards around the downtown area asking people to write down what they love about Landrum and what they hope to see in the city as part of the “Love Landrum” campaign. Rachel Hill and Landrum Middle School volleyball coach Keith Hill, pictured, contributed to the boards by writing down what they loved about Landrum and hoped to see happen in the city. (Photo by Michael O’Hearn)

LANDRUM – The City of Landrum has collected responses from their “Because I Love Landrum, I Hope…” boards that were around the downtown area in February.

The city placed three boards along the downtown corridor on E. Rutherford Street and asked people to write what they wish to see happen in Landrum. One board was in front of Operation Hope, another beside The Hare and Hound restaurant and another in front of Elaine’s Attic Quilt Shop.

The results were collected by the city and will be used in the city’s comprehensive plan, a document outlining goals for the city during the next 10 years. City council members are expected to approve the finished document in August.

According to Rich Caplan, Landrum city administrator, requests from residents of the City of Landrum included a new dance studio, McDonald’s, better Wi-Fi and more small businesses and a variety of restaurants.

Broadmoor Planning is assisting the City of Landrum in creating the comprehensive plan and the plan includes pedestrian infrastructure, trails and feedback from Landrum residents. Alta Planning and Design created a pedestrian plan for the city to implement in their document.

The city will have a joint city council and Landrum planning commission workshop on May 3 where a draft of the comprehensive plan will be presented before changes are made.

On June 8, the revised draft will be presented to the Landrum planning commission to be accepted by resolution before the draft is presented to the City of Landrum. A public hearing is scheduled for July 11 for its first reading. A second reading is planned for August 8.