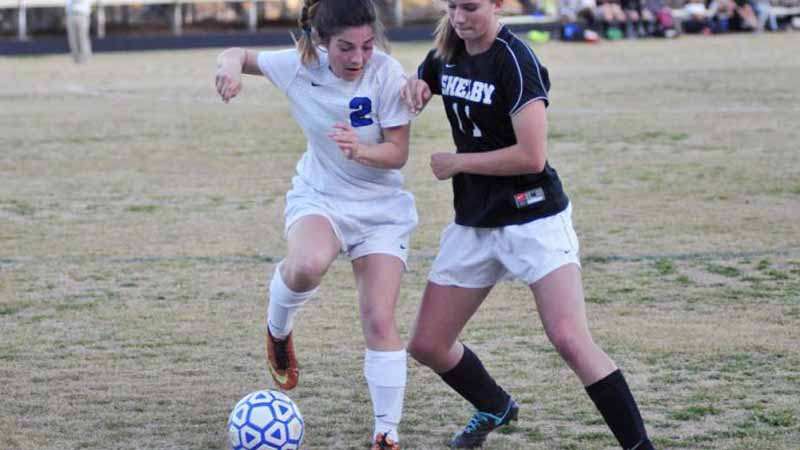 Roman’s goal, less than five minutes into the match, gave Polk County (6-2) a lead it would never lose. The Wolverines built a 3-0 lead, allowed Shelby a late goal, then added one of their own for the final margin.

“On the positive side, we’ve had some good contributions from some of the freshmen,” said Wolverine head coach Lennox Charles. “That’s a good sign for us.

“With Georgia out (senior Georgia Garrett, currently sidelined with an ankle injury), Mireya is going to have to play more, and she’s taking advantage of it.”

Marino tallied with 15:17 left in the half, taking a pass from Reese Alley, tapping the ball past a Shelby defender in the box, then firing a low rolling shot from the right wing into the left corner of the net to give Polk a 2-0 advantage.

The Wolverines extended the lead to 3-0 in the second half as Rhian Alley’s blast from the right side was deflected to Lauren Ketwitz, who put home the rebound for the three-goal lead.

Following a Shelby goal with 17:14 remaining, the Wolverines got a goal from Addie Lynch in the 75th minute to close out the scoring.

“I felt like our energy level was a little bit down,” Charles said. “I’m not sure if that’s from not doing a lot (Tuesday) at practice and on Monday not really being challenged (a 6-0 win at Avery).

“We’re playing better defensively, but at times we’re having breakdowns. I feel like we’re coordinated more on the defensive end. . . we just need more consistency. When we had a breakdown tonight, Shelby either got a chance or they scored. I still feel that defensively, we’re a little more coordinated than in the rest of the field.”

The Wolverines return to action on Monday, traveling to Owen for a key conference clash.