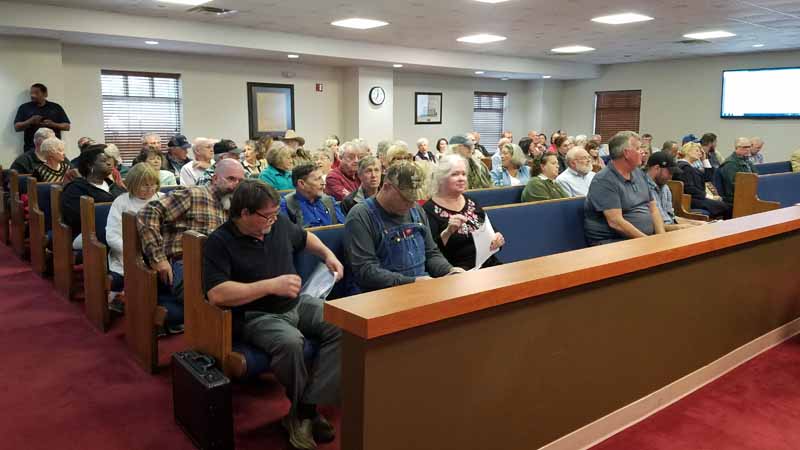 On March 20, the Polk County Board of Commissioners faced heavy criticism for the second meeting in a row from residents over the county's recent property revaluation. Some residents said values increased 300 percent. A short video of a couple of the speakers is posted on the Tryon Daily Bulletin’s Facebook page. (Photo by Leah Justice)

COLUMBUS – For the second meeting in a row, the Polk County Board of Commissioners heard complaints and tearful pleas for help concerning the recent property revaluation that caused some properties to increase in value more than 300 percent.

Mary Dill suggested the county grandfather some property owners and increase their properties three percent, or whatever is needed. Dill also asked for people in the audience who attended the meeting for the revaluation discussion and approximately ¾ of the room stood.

County attorney Jana Berg said she really wishes the county could do what Dill suggested but it just can’t. Grandfathering properties is only something according to state statutes that can be done to abate nuisances or for the public’s health.

“North Carolina general statutes are very clear about taxes and how they are assessed,” Berg said. Berg said assessors look at general sales because that is what drives a value.

Berg said the neighbors who sold out is what drove up the values. “I wish we could offer some relief,” Berg said. “I wish there was a law out there that would allow us to do that.”

Berg encouraged residents to come and speak with the tax office on an informal basis if they feel their property was assessed wrongly. Debbie Thomas Rogers said she called the N.C. Appraiser’s Office and was advised that things would be reversed. She said she also contacted a real estate broker in Wellington, Fla.

Rogers said half of her land is trees in a ravine and she also has deed restrictions preventing her from doing anything with half of her property, which assessors totally discounted. Rogers said according to the state assessor, Polk’s appraisers are not following the rules, otherwise all properties wouldn’t be valued at $20,000 an acre.

“We want this to be our forever home,” Rogers said.

Richard Day said he and his wife are going to pay $7,000 just in property taxes. “I don’t know where I’m going to get that,” Day said.

David Rowe said he and his wife Barbara have lived in Green Creek for 30 years and thought they would die there. He said his property went from a value of $298,000 to $708,623. He spoke of 12 acres of his property being swamp land and his property going up in value 250 percent.

“I voted for all four Republicans on this board but I will not vote for you again or campaign for you like I did this time,” Rowe said.

Kenneth Cochran said he was born in Tryon in 1952 and his parents bought the place where he now lives in 1956. Cochran suggested commissioners change the tax rate for the 35 percent that did increase, even if commissioners have to change it on an individual basis.

Berg said that would be nice, but the county can’t do that as the law doesn’t allow the county to have different tax rates for different properties.

Silvia Frazier said at this point, why bother? She said commissioners keep giving her the impression they are just out of luck.

Frazier said the property where she lives her grandparents bought many, many years ago and her grandmother raised six children and paid for that land, “and now five generations later, we’re going to have to get rid of it.”

“I’m going to have to sell because I cannot afford to pay the taxes. To lose this property on my watch for something that nobody has any control over, it’s just devastating. It’s absolutely devastating,” Frazier said.

Landon Brewington said he inherited his land on John Shehan Road. “I didn’t ask for the equestrian center,” Brewington said, adding that he doesn’t feel like his land is worth any more (than it used to be).

Donnie Edwards said he now has a piece of property that has a wonderful view of a manure pile. He said he got a letter from the county about his property being in a flood plain because of all the equestrian construction.

“My property value is tripled,” said Edwards. Edwards said because of the view he has he feels like his property value should have decreased. Edwards said he would now to have to work another month a year to pay his taxes, saying he has had two strokes and now the county is asking him to work more, “so the equestrian people can play.”

Robert Addy said his land has been in his family for 100 years and the tax rate is going to send his family out of the county but somebody is going to fill their place so the taxes will still get paid, “and you guys don’t care about it.”

Barbara Rowe asked commissioners if any of their values increased 250 percent.

Tom O’Connor said the attorney said there is nothing commissioners can do and that everybody’s hands are tied. He told commissioners he wouldn’t get too comfortable in the chairs they are sitting in.

Meg Bush said she’s a certified appraiser and said people with problems can take it to the state appraisal board about the revaluation company. Linda Tucker said her property is on Moore Road that faces the big screen at the equestrian center. She said she and her husband built their home, nailed every nail and raised five kids there on property her husband’s mother had since 1938.

“I’m trying desperately to keep the little eight acres I have left,” Tucker said. She said her husband served his country and died in June after fighting two cancers. She said she took care of him at home and also took care of her sister in her home, who died seven months after her husband. Tucker said she is disabled and her income is less than $1,000 a month. She cried as she said it will take over three months of her income a year to pay her taxes now.

“I, like everybody else, am going to lose my home,” Tucker said. She said the recent election was the first time she’d ever voted Republican because she thought Polk County needed change, but maybe she made a mistake.

Berg reviewed some exemptions people should check into, such as the elderly and disabled exemption as well as other programs for farmland, called present use value. Berg encouraged anyone who is totally or permanently disabled or at least 65 years of age to check with the tax office about available discounts on taxes.

The exemptions and discounts do not help with acreage but do help with a property owner’s home place.

During commissioner comments at the end of the meeting, commissioners said they do care about the situation. Commissioner Myron Yoder said what commissioners can do is put in place a good equalization and review board (E&R) and get out as much information as they can.

“We’re not exempt,” Bradley said. “We do understand.”

Commissioner vice chair Jake Johnson said he is by no means a lawyer but the county is reading through these things and commissioners do hear the residents. “We’re looking just like you are,” Johnson said. “We want to work with you. Just keep talking to us and we’ll try to do all we can.”

Johnson submitted a letter to the editor this week regarding the revaluation. See Johnson’s letter here.

Commissioner Ray Gasperson said he lives in Green Creek and his property went from $4,000 an acre to $10,000 an acre so his value increased 150 percent. He said long before he became a commissioner he entered his property in the present use value program because his family farms. He said the parcel his house sits on had a 50 percent increase.

“I’m not complaining,” Gasperson said. “I’m being impacted too.” Gasperson said there was a broad increase, mentioning that the steeplechase course also went from $4,000-$10,000 an acre.

“I’m not justifying anything,” Gasperson said. “I’m just saying there’s a broad increase. I deeply regret people that are being impacted on very tight budgets.”

Commissioner Melton said there was a lot of emotion and some tears in the room Monday night. He said he’s appreciative of the citizens who talked and expressed their emotions.

“I wish there was a way I could reach out and help them,” Melton said. Melton said commissioners have certain laws they have to go through and he is so glad residents came forward to speak their minds.

Residents who do not agree with their new property values can go to speak to the tax office on an informal basis. Following that process, if property owners are still not satisfied, they can appeal their value to the Polk County Board of E&R, which is scheduled to begin holding hearings on values this spring. If a property owner is still not satisfied with the board of E&R’s decision, they can appeal to the state.