Polk discusses how to pay for $2.145 million worth of repairs to dam 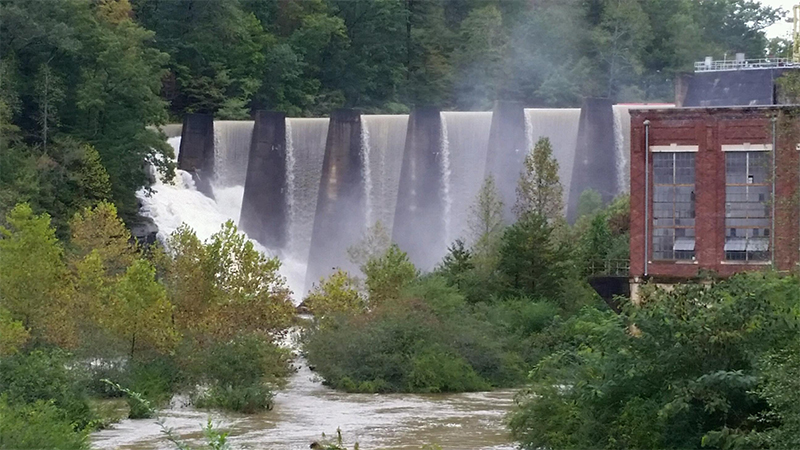 The Polk County Board of Commissioners discussed this week needed upgrades to the Turner Shoals Dam at Lake Adger and how the county will pay for those repairs, scheduled to be done over three years, beginning in fiscal year 2018-2019. The full story starts on page 4. (Photo submitted by Sky Conard)

MILL SPRING – The Polk County Board of Commissioners had a lengthy discussion this week over needed repairs to bring the Turner Shoals Dam at Lake Adger up to current standards, and how to pay for those repairs.

Commissioners met Monday, March 20 and heard from engineer Dave Odom, who detailed the history of studies done on the dam as well as 2014 cost estimates for three major repairs to the dam.

Odom said he expects the county to do the repairs over a three-year period, beginning next fiscal year. The first repair needed is a concrete overlay, which will take approximately six months to complete and was estimated in 2014 to cost $1.15 million, according to Odom.

The second repair, expected to be done in 2019-2020, is the installation of anchors to improve the stability of the bulkhead structures. The anchors are expected to take about six months to complete and were estimated in 2014 to cost $690,000, according to Odom.

The third and final repair is the seismic retrofit of the arch spillway, which is estimated to cost $575,000, according to Odom, which would total $2,415,000 for all three projects, according to 2014 estimates. Odom said those estimates will be updated once the design of the repairs is complete.

Odom said the first real record of files on dam studies began in 1994, with a dam failure analysis. A 2007 report was completed by Black & Veatch which analyzed several different aspects of the dam, including how much safe yield is in the lake for potential water use and what likely repairs would have to occur to the dam over the next 10 years or so. Odom said the county relied on that report in its review prior to purchasing the dam. Polk County purchased Lake Adger for a future water source and the dam for $1.6 million in 2009.

Where the county stands currently with dam repairs is that the N.C. Department of Environment and Natural Resources (DENR) is requiring the county complete a revised analysis of the probable maximum flood, and that study has been completed by AECOM. Odom said because the probable maximum flood changed and was increased by the state, the county had to go back and look at the stability analyses to determine what improvements would need to be made for the dam to be able to handle that size flood.

The requirement is that the dam handle a ¾ pmf flood (probable maximum flood), which Odom described as a flood that equates to almost 40 inches of rain in about a 72-hour period.

“This is a huge, huge storm that we’re talking about,” Odom told commissioners, “recognizing that we only get about 55 to 60 inches of rain a year on average in our area.”

AECOM did an inspection report in 2014, requested by DENR that included a subsurface inspection investigation, which came up with several recommendations, according to Odom. Some small corrections were needed, which were completed by Steppe Construction, Odom said.

Odom said AECOM informed him last week that a draft is being reviewed on the earthquake stability study and also the ability to handle the ¾ pmf flood and they plan to release that study to DENR for its review in the next month.

Once DENR gives its approval, AECOM can begin the second phase, which is the design of the repairs, Odom said.

Commissioner Ray Gasperson asked how much money the county currently has to do dam repairs.

Gasperson said the county can’t have tax increases on dam repairs and may need to borrow some money.

Pittman said breaking it up into three years makes it a little easier.

When Polk County purchased the lake and the dam, commissioners began reserving money in a special line item for future dam repairs. Commissioner chair Tommy Melton asked Gasperson if the county then decided to place $200,000 a year in that line item. Gasperson answered yes, but said there were some years the county scaled that number back to around $50,000. Gasperson said there were several years he didn’t vote to approve the budget for that reason. Studies and other repairs done over the years to the dam have also come out of that funding.

Pittman said the county will put whatever it can in that fund for the upcoming budget year, which begins July 1.

Gasperson said by the time repairs begin, the county could have $1 million in that fund so the county may not have to borrow any money to start repairs.

Gasperson asked if it were a brand new dam built to current specifications, would it still be rated as a high hazard dam.

Odom said yes. It is listed as a high hazard dam not because there is anything wrong with the dam but because of its location and the damage it could do if it ever breached.

Commissioner Myron Yoder said unless the county had a catastrophic flood or earthquake or something like that, the dam is safe at the moment.

“It’s an update we have to do on the dam,” said Yoder.

Yoder also said the county may have enough money to do the repairs if they are done in phases.

“I think we can look at all these things,” said Yoder. “Hopefully we won’t have to borrow for this.”

Odom also said you can’t design for the absolute storm.

“When the work is done it will definitely enhance the stability of the dam for a long, long time,” Odom said.

Sky Conard, Lake Adger resident, also spoke about the dam rehabilitation during citizen comments on Monday night. See her full comments in a letter to the editor here.