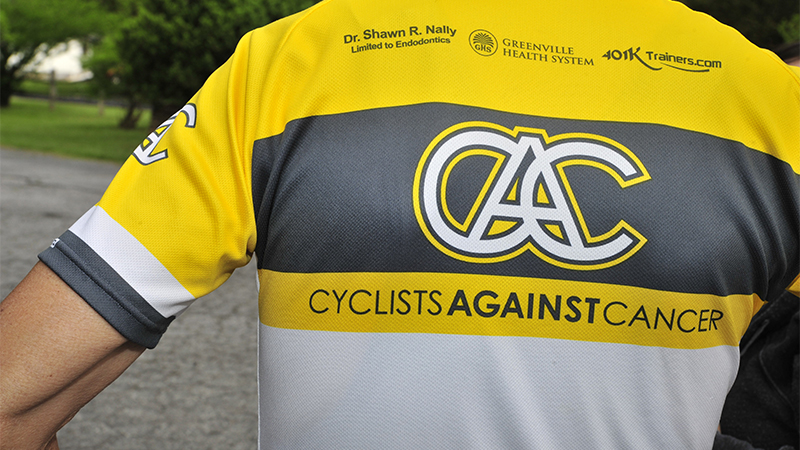 Raising funds for Gibbs Cancer Center’s Survivorship Program is the backbone of John Cash’s annual Climb to Conquer Cancer bicycle ride which takes riders for as many as 10 round trips up and down the Saluda Grade on Hwy. 176.

John Cash is fighting his own war against cancer, the disease that claimed the lives of both his parents, and of his sister.

“I would love to see cancer cured in my lifetime,” proclaimed the Landrum resident, who, with his wife Diane, owns and operates Nature’s Storehouse, a health food and natural supplement store in Tryon.

Since 2009, Cash has backed up his words with his annual Climb to Conquer Cancer bicycle rides in Polk County, to the tune of raising over $60,000 for the Gibbs Cancer Center’s Survivorship Program in Spartanburg. Gibbs is completing a similar facility in Greer.

This year’s Climb to Conquer Cancer, set for Saturday, April 29, will feature ten trips up and down the famous Saluda Grade on U.S. Hwy. 176 toward Saluda, each “lap” gaining some 1,000 feet of elevation, or some 10,000 feet of elevation total, and over 80 miles, for the maximum ten round trips that Cash and some others will ride.

This year’s ride will begin outside Caro Mi Dining Room, 3231 U.S. Hwy. 176, between Tryon and Saluda. Former professional cycling racers George and Rich Hincapie have indicated they’ll ride with Cash and others. Expect other current or former pro cyclists to also ride with Cash and the Hincapie brothers.

Riders should arrive on site between 7:30 and 7:45 a.m., with clip-in at 8. The Polk County Sheriff’s Department will provide a safety escort on the first climb, during which, all riders will travel together.

Donations, made to Gibbs Cancer Center Survivorship Program, can be dropped off at the ride site, at Nature’s Storehouse, 427 South Trade Street, Tryon, or mailed to the store. Donors need not participate in the ride, but all riders are encouraged to join.

Refreshments will be available at the April 29 ride site.

Cash is displaying his usual high-octane enthusiasm in his new role as a board member at Gibbs, where officials had previously honored him for his fundraising efforts. Cash will serve on the board for at least three years, his term having begun this past January.

Cash describes this obligation as “an amazing opportunity.”

“I’m very humbled,” he said, “to be serving with other board members who care so much about fighting cancer.”

“My passion,” he continued, “is in survivorship and navigation, walking patients through their treatment process.”

Cash notes that early screening by Gibbs Cancer Center is responsible for high survival rates from various types of cancer in this region.

In addition, riders and others may purchase tickets to win (only 50 tickets will be available) a 2001 Harley-Davidson Sportster 1200 motorcycle with only 2,100 miles on it. That drawing will be held at the ride site on April 29, with a portion of the proceeds going to Gibbs Cancer Center and Research Institute. For ticket information, call John Cash at 828-859-6356.