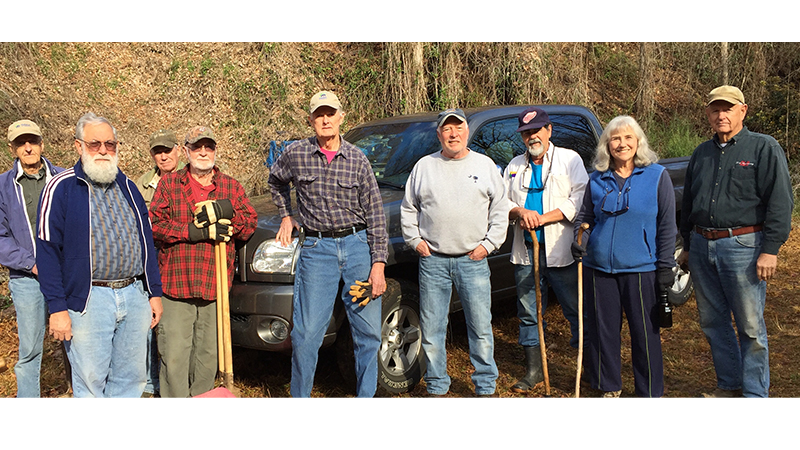 The Tryon Parks Committee is pleased to announce the placement of five benches along the Vaughn Creek Greenway located at 884 New Market Road.

Generous contributions by local residents, David and Robin Edgar, Monica Jones, and Terry Ackerman provided the funds for the purchase of these attractive outdoor benches. The town of Tryon employees assembled the benches off site and delivered them to their final locations along the greenway.

Dedicated in April 2014, the Vaughn Creek Greenway trail follows scenic Vaughn Creek for about 3/4 of a mile. Those walking along the route can now rest and relax on the newly installed benches as they enjoy the beautiful natural setting.

“The Vaughn Creek Greenway is a magical place that adds so much to the local charm of our community,” says Robin Edgar. “We walk there often to enjoy the waterfalls and wild flowers and decided to donate funds for two benches to sort of jump start a Friends of the Vaughn Creek Greenway. We are so grateful that Terry and Monica immediately picked up the ball to donate three more!”

Parks Committee member, Susie Hursey says a lady who often walks the greenway with her two dogs has already expressed how thankful she is for the benches. Due to her husband’s medical condition, the benches make it easier for him to rest as he accompanies her on their stroll. The committee has other plans to enhance the greenway. In addition to raising funds to install a picnic table beside the creek accessible from New Market Road, they hope to build a small shelter over the table.

Since its inception in 1983, Thermal Belt Habitat for Humanity has constructed 67 homes in Polk County and Landrum. Funded by profits from Habitat ReStore in Landrum, mortgage payments from previously built homes, grants and donations, volunteers assist with construction and at the Habitat ReStore. Each Habitat family makes a very modest down payment and invests hundreds of sweat equity hours working on one of the homes or at the Habitat ReStore prior to closing on their home.

“We were glad to be of assistance to enhance this beautiful trail so close to home,” says Cobourn.

Anyone interested in becoming a Friend of the Vaughn Creek Greenway or donating funds for other park projects call Tryon Town Hall at 828-859-6654 and leave a message for the Parks Committee with Meg Rogers. Anyone interested in volunteering or making a donation to Thermal Belt Habitat for Humanity, call 864-457-5325.