Lydia Leonhardt Clontz, 72, of Forest City, N.C. left this earth on March 16, 2017, and now is walking hand in hand with her Lord. She was born in Morganton, N.C. Lydia was preceded in death by her parents, Rollin Odes and Lola Belle Jaynes Leonhardt, brother Blanton C. Leonhardt and sister Hazel L. Fisher. 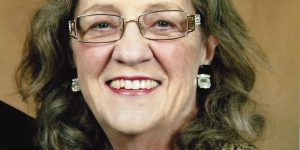 Lydia has had a close relationship with her Lord even as a young child and she gave credit to her Lord for her full life. His strength supported her through a lengthy, courageous, ten-year battle with cancer. She died peacefully at home surrounded by her family.

Lydia graduated from Morganton High School and from the University of North Carolina at Greensboro with a home economics interior design degree.

She and her husband made their home in Raleigh while he completed his graduate degrees at NC State University. She worked for the North Carolina State Highway Commission and designed the 1968 and 1969 state highway maps. After leaving Raleigh, they resided in Spartanburg, S.C.; LaGrange, Ga.; Hampton, N.H.; Tryon, N.C.; and Forest City, N.C.

Lydia made a positive mark in her community and on its people. In LaGrange, she was president of the United Methodist Women at LaGrange First Methodist Church and president of the Willowood Garden Club where she received many flower arranging awards.

She lived in Tryon, N.C., for 24 years. While there, she obtained her real estate broker’s license and sold real estate for over ten years. She also volunteered at church and for many community organizations. She was on the Polk County Red Cross Board for eight years where she served as vice-chairman and fund drive chairman for many years.

At Tryon First United Methodist Church, she taught Sunday school and held plays, Easter egg hunts, and organized a community Bible School. She was on the board of trustees and was chairman of two renovations at Tryon First United Methodist Church. For 20 years, she was on the board of the Children’s Theatre Festival which runs “Super Saturday” for children in Tryon, and she was president of the Tryon Youth Center when it purchased its present building on Hwy. 176. The TYC presents summer youth plays and provides scholarships.

While living in Rutherford County, besides teaching Adult Sunday School class, Lydia’s time was consumed by the Bostic Lincoln Center and its work to determine the true birthplace of Abraham Lincoln. She was fundraising chairman and later vice chairman and president. For the past several years, she has served as Chairman and Museum Director of this 501(C)(3) organization. She was also a proud member of the Daughters of the American Revolution.

The family will receive friends from 9:30-11 a.m., Monday, March 20, 2017 in the fellowship hall of the First United Methodist Church in Rutherfordton, N.C. The funeral will be held at 11 am in the church sanctuary with Dr. Sydnor Thompson and the Rev. Barbara Mayo officiating. The graveside service will be held at 3 p.m. at Glen Alpine Cemetery in Glen Alpine, N.C.

Sossoman Funeral Home and Crematory Center is assisting the family with the arrangements.

Condolences may be sent to the family by visiting www.sossomanfh.com.