Would you be a Loyalist or Patriot? 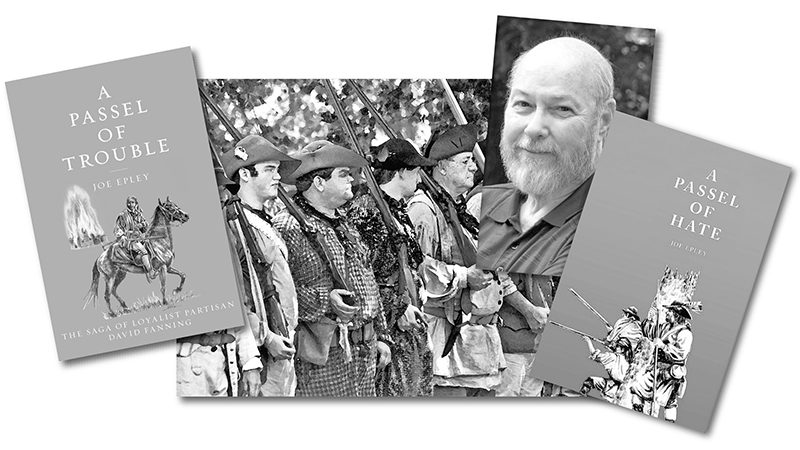 Would you have been a rebel Patriot or a law-abiding Loyalist? From his books of historic fiction, author Joe Epley will share facts to help you appreciate the price of choosing a side. (photos submitted by Vincent Verrecchio)

Your options are to remain loyal to King George and fight for the rule of English law or take up arms in a rebellion ignited by malcontents in distant New England. There is no neutral position. In the history-based novels of Joe Epley, Carolinians make the choice, turning anger and weapons on neighbors and living or dying with their decision.

In this next Live@Lanier program, Tuesday, March 21 at noon, you will have the opportunity to choose your side. Based on what Epley reveals in his Passel Series, perhaps you can resolve the ambiguities of friends and foes across the Revolutionary War landscape from Kings Mountain to what is now Polk County.

In Epley’s first novel, “A Passel of Hate,” a Carolina family splits with three brothers fighting for the king and two fighting to be free of far-off tyranny. In Epley’s recently published “A Passel of Trouble,” the historic partisan leader David Fanning stands with the king and wars against the Patriots of North Carolina.

With Epley emphasizing his new book, you will get to know Fanning as a youthful South Carolinian who burned Patriot homes in North Carolina for more than two years, escaped 14 captures, and took a governor hostage.

Kirkus Review writes, “Rare to see a sympathetic treatment of the Loyalist side…which makes this novel an uncommon treat.”

A former Green Beret and TV journalist, Epley founded a public relations firm in Charlotte which over 38 years earned international recognition and honors. In his spare time, he canoed Artic rivers, hiked the Australian outback and helped restore homes destroyed by hurricanes.

Copies of  Epley’s latest book will be available for signing and sale. The Lanier Library is located at 72 Chestnut Street in Tryon.