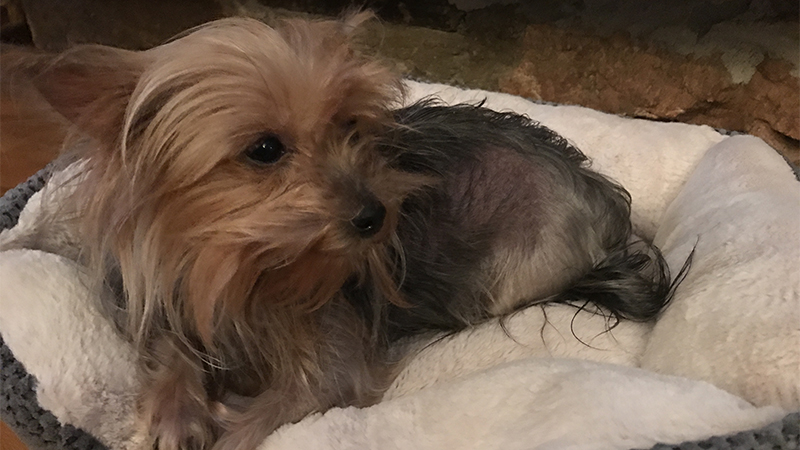 Quite a few years ago, I wrote a series of tales called “Best Medicine.” I think it’s been four or five years since the last one. But who knows? Time, like lots of other things these days, seems to be slipping away from me.

The series was put together because I’d been noticing that sometimes the match up between animal and adopter was without a doubt the best medicine for both of them. I stopped the series because I then realized that over 90 percent of my cases fall into that category.

Little Coco, a 2- to 3-year-old Yorkshire Terrier, was abandoned by its owners to fend for itself when they had their first child. She was then seen all over the neighborhood rummaging through trash looking for a meal. A neighbor of the first family found her and saw that she had been on her own for a while. She was taken in until they could find a true forever home for her.

Coco eventually wound up with Sonya, one of the nurses who treats me at the dialysis clinic. Other things went on before the final transfer was made, but my main interest is in the final result.

My reason for beginning this story about best medicine is that sweet Sonya and sweet Coco fit like a glove and seem to be meant for each other. I had heard about Coco but hadn’t met her until a few weeks ago at Landrum Vet. It seems Coco has some sort of allergies or skin disorder which very much reminds me of a dog I helped recently, Hope, who by the way is doing very well. Coco itches and scratches until she bleeds and has some patches of lost hair. It’s possible she may have had this problem when she was first let go and it’s possible the latest trauma may have exacerbated it.

I loved little Coco up at the vet and asked Sonya what the problem was. It seems she has to stay on her meds, otherwise she tears herself up. Another lady who had recently lost her Yorkie was interested in Coco but Sonya has found a little soul mate. The meds and the tests for allergies were draining Sonya, and though she was struggling, she would never ask for help.

I went to Landrum Vet and made Coco one of Lennie’s Kids; all tests and meds for Coco are now being handled by my fund. I informed Sonya to give Coco whatever tests she needs and not to worry about the bills.

You see, I didn’t have a doubt that Coco and Sonya were the best medicine for each other and to be perfectly honest, helping these two sweet ladies is pretty good medicine for me, too.