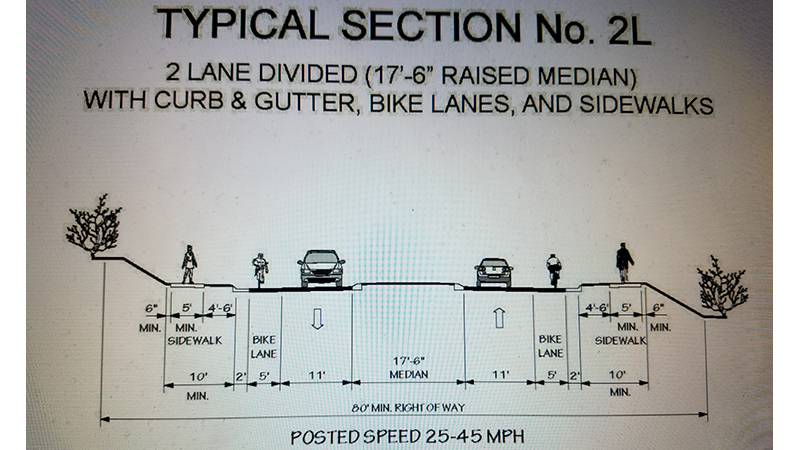 A typical highway plan used by the N.C. Department of Transportation that includes a two-lane road with a raised median, curb and gutter, bike lanes and sidewalks.

TRYON – N.C. Department of Transportation (DOT) officials said a planned project to widen Hwy. 108 between Columbus and Tryon to four lanes is not set in stone and both public and local government opinion is being sought before a concrete plan is in place.

Burch said DOT had a meeting on Jan. 17 with town and county officials about the plan, which was to construct four lanes on a 3.5-mile stretch of Hwy. 108 between the roundabout in Columbus and the U.S. 176 intersection in Tryon.

“It was very clear when we met with the county manager and town managers that a four-lane facility would not be well received,” Burch said.

The Town of Tryon held a public information meeting last month regarding the four-lane proposal with about 100 people attending and all speakers were against a four-lane highway.

Burch and Uchiyama brought two alternatives the state will consider, which are both two-lane roads.

Burch and Uchiyama said public input and the input of local government officials is very important in this process.

“Government officials and their constituents will drive this process,” Burch said.

A public meeting is being planned for the spring of next year, with Burch saying it will likely be held in April or May of 2018.

Burch said a consultant will show the public maps with aerial photos and said the four-lane option is not set in stone. He said alternatives will be shown and the state will take comments for another 30 days after the meeting.

“Based on that (public input) we will select an alternative,” Burch said.

The state board of transportation is scheduled to approve the entire state STIP (State Transportation Improvement Program) this June, which includes projects that will receive funding during a 10-year period, including the Hwy. 108 project and an I-26/U.S. 74 intersection project in Columbus.

Burch said the Hwy. 108 project on the STIP plan does not include specifics as to how many lanes the project will be, only that it is a roadway widening project.

The Hwy. 108 widening project schedule is currently for construction to begin some time after a construction bid is approved, likely in March 2023, according to DOT officials.

Rights of way acquisitions are scheduled to begin on June 30, 2021. 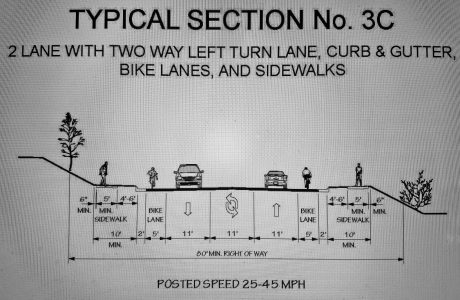 A typical highway plan used by the N.C. Department of Transportation that includes a two-lane road with a two way left turn lane, curb and gutter, bike lanes and sidewalks.

According to DOT information, the Strategic Transportation Investments (STI) law was passed in 2013 and allows the DOT to use its funding more efficiently and effectively to enhance the state’s infrastructure while supporting economic growth, job creation and a higher quality of life.

STI also established the Strategic Mobility Formula, which is a new way of allocating available revenues based on data-driven scoring and local input. It was used for the first time to develop the DOT’s current construction schedule, the 2016-2025 STIP, which identifies the transportation projects that will receive funding during a 10-year period. Federal law requires the STIP to be updated every four years but the DOT updates it every two years.

The strategic mobility formula uses a data-driven scoring process along with local input, according to DOT information. 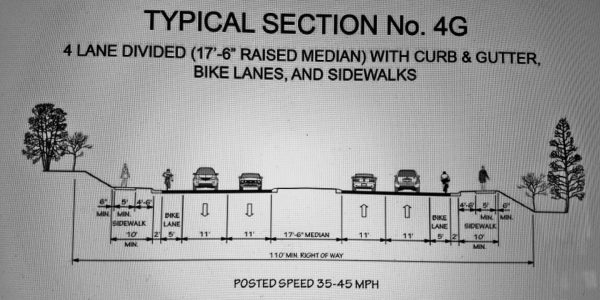 A typical highway plan used by the N.C. Department of Transportation that includes a four-lane highway with a raised median, curb and gutter, bike lanes and sidewalks.

The 2016-2025 STIP includes an additional 478 highway projects and is expected to support about 300,000 jobs, which is 300 more projects and 126,000 more jobs than with the old formula, which distributed money equally across the state.

The current STIP plan has 1,073 projects in all 100 North Carolina counties.

The division needs category is shared equally over DOT’s 14 transportation divisions, which are groupings of local counties. Project scores are based 50 percent on data and 50 percent on rankings by local planning organizations (RPOs) and the DOT transportation divisions. Criteria includes congestion, benefit/cost, safety, freight and military and accessibility/connectivity.

Regional impacts compete within regions made up of two transportation divisions, with funding divided among the regions based on population. Data makes up 70 percent of the project with local rankings making up 30 percent.

Statewide mobility is based 100 percent on data.

The Hwy. 108 widening project is known as TIP number R-5838. The project was included in the draft STIP plan, which was released by the state in January.

Uchiyama said the Hwy. 108 project got included in the draft STIP plan through a process of how DOT prioritizes projects, including the local RPO assigning points. Uchiyama said the process started two years ago, in 2015. Polk County is part of the McDowell, Rutherford and Polk RPO, which includes town and county managers.

Some surveying is occurring as part of the I-26/U.S. 74 interchange project but Burch said the DOT has also asked surveyors to do surveying for aerial photography as soon as possible. Traffic counts are done periodically and there will be a traffic forecast done, but one has not yet been done.

Burch also said there will be other surveying done for this project, including for historic architecture, wetlands, endangered species and creeks, etc.

Burch said currently the DOT is trying to accelerate projects because of the cash balance.

The Bulletin asked the DOT officials if the current projects in Polk County were being done or expedited because of the Tryon International Equestrian Center (TIEC) or because the World Equestrian Games is coming to TIEC in 2018, and they answered no.

“This has nothing to do with the world games coming,” Burch said. “This had been identified as far back as 2008.”

The last traffic counts for the stretch between Columbus and Tryon were done in 2015 with average daily traffic (ADT) being at 8,900 vehicles per day. ADT counts are the highest on the Columbus end of the project and they get lower approaching Tryon. The ADT at the Harmon Field Road intersection was 8,200 vehicles per day in 2015 while the 176 intersection at Tryon’s first traffic light by approaching Tryon Elementary School was 6,600, according to Burch. Traffic counts and other information about the DOT can be found at ncdot.gov.