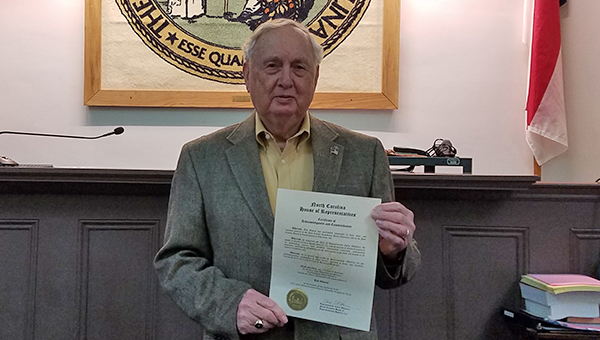 Former Polk County Commissioner and Polk County Republican Party Chair Ted Owens was recognized by Rep. Chris Whitmire for his service. Owens is pictured in the Polk County Courthouse with his commendation. (photo by Leah Justice)

Whitmire presented a certificate of acknowledgement and commendation at the close of the 2015-2016 session.

Following is the certificate of acknowledgement and commendation given to Owens:

WHEREAS, he supported the office of Representative Chris Whitmire, the people of North Carolina House District 113, and the citizens of North Carolina in an outstanding manner with steadfast conservative leadership, professional demeanor, outstanding knowledge, and the willingness to go above and beyond in all matters necessary, and

WHEREAS, he is greatly appreciated by Representative Whitmire for his professionalism, commitment to public service, attention to detail, and reliability during the 2013-2014 and 2015-2016 Biennium Sessions.

Now, therefor, this 31st Day of December, in the year two thousand and sixteen, Representative Chris Whitmire extends his sincere appreciation and commendation to Ted Owens on the occasion of the conclusion of the 2015-2016 North Carolina General Assembly Legislation Term.