Cameron Langford: From Buddhism to the tranquility of books 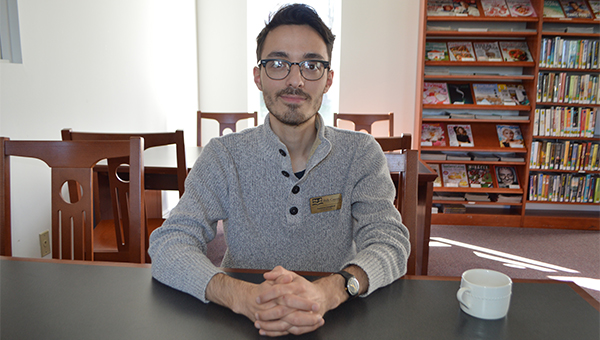 SALUDA – Where were you at the age of 17? When he was 17, Cameron Langford found himself within the Kadampa Meditation Center Buddhist temple in Atlanta.

Langford is now 27 and lives in Saluda while working at the Saluda library. Born in east Texas, Langford moved to Florida when he was in the sixth grade and then spent most of his life growing up relocating from city to city.

“It began as an ambitious, not completely altruistic, motivation for living in a temple,” Langford recounted. “It was a way to get out of my parents house and I thought, ‘oh, yeah, I can do well in a spiritual environment.’ Coming into it as a teenager, I was learning how to be an adult, how to grow up and be more mature.”

Langford said he learned about the temple in Atlanta when he was living in Florida and has been practicing Buddhism for 11 years.

“I really wanted to live in a temple because I had done it before and I was really comfortable with it, but I had been requested to go out to New Mexico because they were opening a new temple there in Albuquerque,” Langford said. “When I came back to Florida, it was temporary and I was looking for something to do so I volunteered to work at a vegetarian café at the temple in Atlanta before they asked me to come back.”

Through the café, Langford recalled being able to implement the Buddhist teachings while serving people and being able to pray while working shifts. These experiences, Langford described, kept him on his spiritual path.

“It might sound cliché, but no matter where you are or what you’re doing, your spiritual path is always alongside you,” Langford emphasized. “That was probably the biggest takeaway I got from living in all of the different temples.”

As education program coordinator, Langford handled the spiritual curriculum and recounted being in charge of the rituals and shrine room at the Atlanta temple. This job was not directly tied to the spiritual practices of the temple, Langford pointed out.

“It was within my domain, and I had volunteers help me, to maintain the shrine room where they had the statues and offerings and do publicity for the temple as well,” Langford explained. “They have daily meditation practices like chant and prayers and meditation in the morning and in the afternoon.”

One of the two major traditions of Buddhism is Mahayana, which Langford explained as being from the school of Tibetan Buddhism.

According to the Religious Tolerance organization’s website, Mahayana became an offshoot of the first tradition within Buddhism, Theravadan, during the first century A.D. Mahayana became a more flexible and common way to practice Buddhism for more people and believers from all walks of life.

“There are quite a few rituals that go along with having come from Tibetan Buddhism and we still maintain the practices of ringing the bell and blessing waters, that kind of thing,” Langford illustrated. “I also helped with the branch classes and helped teachers who wanted to teach at the branches around the Atlanta area.”

Langford described living in a communal space in the temple as “leading a spiritual life” and said this involved living mostly with monks and nuns who are celibate.

“They have certain vows that they have taken and it leads to living a more quiet and more meditative life, and you basically learn how to integrate Buddhist teachings into every day life,” Langford defined. “For example, Kadampa practitioners would take a certain set of teachings, the 84,000 different teachings of Buddha, and emphasize different branches of Buddha teachings as practical instructions.”

Transitioning back to society after living in the temples was something Langford described as an isolated process with a “learning curve.” Relationships became something new to him after the age of 22 because he recounted having never experienced them during his time in the temples.

“When you’re living in a temple with celibate people, it’s a different life because you are following a system or the schedule of the temple,” Langford illustrated. “You get up at a certain time, do a certain set of prayers, work, another set of prayers, classes in the evening, dinner and then bed. It may not sound like doing a lot but you lived a full life.”

Langford said he decided to work at the Saluda library because it felt familiar to him. He emphasized having not missed out on anything during his five years in various temples because he travelled the world going to different Buddhist festivals.

“I wasn’t lacking any social involvement and it’s much like going to church,” Langford explained. “One of the reasons why I was interested in this job is that it is peaceful and community-based in a community that is so tight-knit. It feels familiar to living in temple but not so cloistered from the rest of the world.”