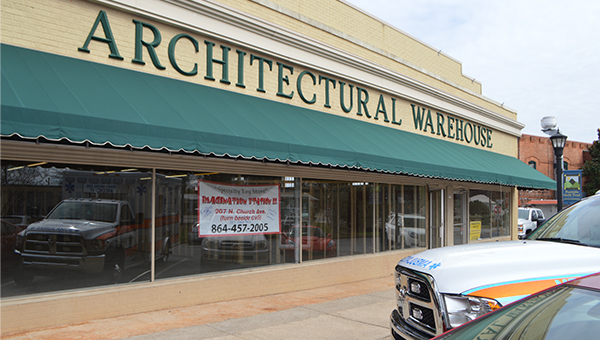 Construction is ongoing to prepare the building’s 6,000 sq. ft. of space for new tenants. (Photo by Michael O’Hearn)

Architectural Warehouse was located in downtown Landrum for 14 years before owner Jim Strausbaugh consolidated the business with the second location at 151 Southern Mercerizing Rd. in Tryon in January. The building sat vacant until Otto bought it in February.

Otto said she bought the building to keep the parking lots on the side and behind it  open to the public.

“I could not imagine someone buying the building and closing the lots,” Otto emphasized. “It is imperative we maintain parking in the city, especially downtown.”

“The building will serve as an incubator for small businesses and vendors,” Otto said. “Maybe people from the Farmers Market want to sell their goods during the off-season or a jeweler wants to sell her jewelry. I’m trying to get things ready as quickly as I can so businesses can open.”

By mid-April, the building will be ready for businesses to move in. Otto emphasized bridging the gap between the Landrum Depot and the businesses downtown as the reason why she bought the building.

“I want to see businesses start going down Trade Street so we can get the Depot tied in with the businesses downtown,” Otto explained. “It will make people walk around more and enjoy the city.”