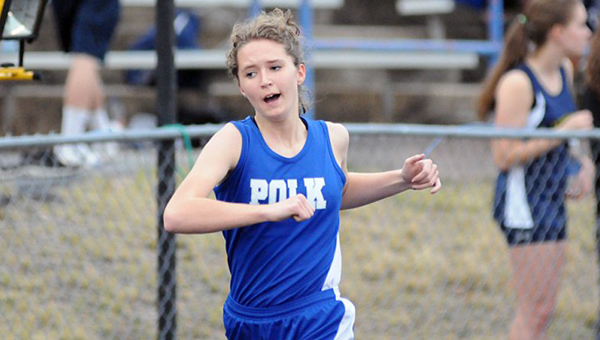 Polk County opened its 2017 track and field season Friday, battling the cold and five other teams in the 2017 Tony Waldrop Invitational in G.M. Tennant Stadium.

Despite temperatures that dropped into the low 40s by meet’s end, the Wolverines still had a handful of qualifying performances for the 2A West Regional in May as well as other event winners.

Landrum won both the boys and girls team titles at the meet, the Cardinals nipping Brevard by three points in the girls standings and finishing well ahead of Kings Mountain in the boys competition. Polk County placed fourth in each team chase.

The Wolverines had two events with two regional qualifiers. Micheala Nelon won the shot put with a throw of 33-6 1/2, finishing just ahead of teammate Reagan Waddell’s 33-3. Both easily surpassed the regional qualifying standard of 32-0.

On the boys side, Jake Justice and Troy Lieberman finished 1-2 in the pole vault and posted regional qualifying vaults, with Justice clearing 12-6 and Lieberman topping 12-0.

Other event winners for the Wolverines included:

Both Polk County teams will be in action again next Friday as Polk hosts the Wolverine Co-Ed Invitational beginning at 4 p.m.