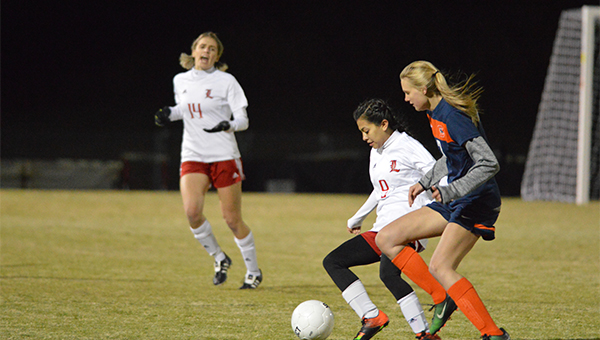 Landrum’s Yanet Borja (#9, white jersey) is winning this fight for the ball with a Chapman player at Cardinal stadium on March 3. Borja scored one of the Cardinals’ goals, as Landrum defeated Chapman’s Panthers, 5-2.

Second-half play was key for the Landrum women, who turned back Chapman, 5-2, in non-region soccer on Friday evening, March 3, at Cardinal Stadium.

At half time, the Cardinals (2-1 overall going into Monday evening’s match against visiting Byrnes) held a 2-0 lead over the visiting Chapman Panthers.

Less than two minutes into the second half, the Panthers sneaked one into the Landrum net, to cut the Cardinals’ lead to 2-1, but the Cardinals breathed more easily 30 seconds later, when Annie Kate Hodge booted in a free kick, to make it 3-1.

With just over 22 minutes remaining in the contest, Landrum’s Laura Ford scored off of Marley Dickson’s corner kick, upping the Cardinal lead to 4-1. Chapman scored on a long kick to make it 4-2, but Landrum ended the scoring, and won easily, when Lanie Treadwell scored on an assist by Hodge. Other Cardinal goals came from Aubree Owens and Yanet Borja. Hannah Phillips and Emily White also contributed assists.

Results from Monday’s match against Byrnes were not available at press time. This (Tuesday) evening, the Cardinals are at Blue Ridge, with action set to begin at 5:30, weather permitting. This Friday, March 10, the Cardinals host cross-state rival Polk County, with starting time set for 7 p.m.