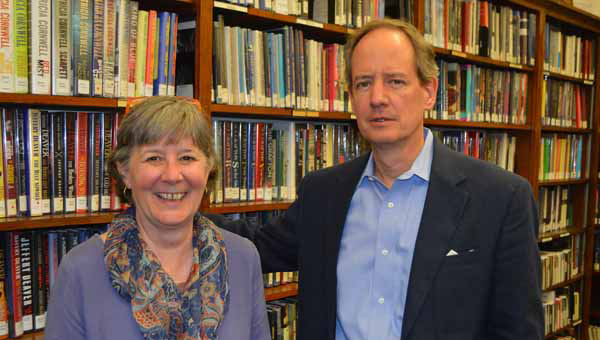 Amber Keeran, left, and Peter Franklin, right, were hired recently at Lanier Library. Keeran was hired as the new library director and Franklin was hired on as executive officer. On the volunteer side, Vince Verrecchio was named creative officer and Tim Boyce the new board president. (Photo by Michael O’Hearn)

TRYON – Founded in 1889, Tryon’s Lanier Library is one of many membership libraries that existed in the days of industrialist and philanthropist Andrew Carnegie. This was during the late 1800s when Carnegie funded more than 1,600 library buildings that had his name.

The Lanier Library, named after poet Sidney Lanier and founded by five women in 1889, celebrated its 125th anniversary in 2015. Lanier’s widow Mary heard the group wanted to call themselves the Lanier Club and so she donated two volumes of poems composed by local poet Sidney Lanier for the proposed library in 1890.

“I’ve been here for 14 or 15 years and this was the first library I walked into when I moved here,” Keeran recalled. “I’ve also worked at the Polk County Public Library as their first children’s librarian part-time for a year and I also taught in special education in Summerville, S.C. for 15 years.”

A Bowling Green State University undergraduate, Keeran moved from Ohio to Charleston and received her library science degree at the University of South Carolina in Columbia and a master’s degree in curriculum instruction at the Citadel. She retired in May 2016 and lives with her husband Jeff Jenkins in Tryon. They have a son, Eli.

“I was retired for six months and I had people convince me this was too much fun,” Keeran said. “It reminded me very much of the library I worked in when I was in Charleston — the West Ashley library. It was a neighborhood library that was very small and it was threatened to be closed down several times because there were people that would come in and talk to the people at the desk. They would come, check out a book, take it home and bring it back the next day.”

Franklin comes to Tryon from the New England area. He graduated from the University of Massachusetts Amherst with an accounting degree and a master’s degree in business administration and law degree from Duke University. Franklin worked as the group director for worldwide sports and event management with Coca-Cola based in Atlanta for 25 years.

“I worked as a CPA for three years. Then I moved south to go to graduate school and then worked as a lawyer for a few years before going to work for the Coca-Cola Company in Atlanta,” Franklin narrated. “I was the only person in the company to transition from the legal function to the marketing and I led our global sponsorships for things like the Olympics, World Cup and the Special Olympics.”

Franklin recounted visiting almost 100 countries and doing events in 40 countries. The first Olympics event he attended was in Lillehammer, Norway in 1994, an experience he described as “an iconic winter Olympics” event.

“That was the first Olympics I worked on and it was a great experience,” Franklin explained. “I’ve lived in Atlanta on and off for 25 years, so actually being able to be home and host the Olympic games in 1996 was pretty cool. Then I loved Sydney in 2000, a great place to be, and then the summer Olympics in London in 2012 was fantastic.”

Keeran and Franklin join Vince Verrecchio, new creative director, and Tim Boyce, new board president, as the library’s newest additions to the slate of leaders.

Adding new program events and implementing a new online book catalogue system are the first steps in shifting the direction of the library.

“There’s a lot going on here. We’ve had a lot of technology that we’ve just put in place thanks to a grant from the Polk County Community Foundation,” Franklin said. “There was a specialized library on Hwy. 176 that donated their Felburn collection full of natural history and nature to us. We also have a lot of fantastic programs coming up like Live@Lanier.” Recently, Adam Marcello from Black Coffee came to the library for a Life@Lanier talk about the history of coffee.

As one of the last subscription-based libraries, Lanier Library serves close to 600 members, according to Franklin. He added that a common misconception people have is that the library is off-limits to non members.

“It used to be that every community, in the pre-Carnegie days, every neighborhood had a private lending library,” Franklin explained. “A lot of them have left. Members can take parts of the collections home and non-members can use our media on-site. The programs are open to the public. I think it’s both an opportunity and a responsibility that Amber and I both have to move the long history here forward and, at the same time, that it remains the treasured icon that it is.”