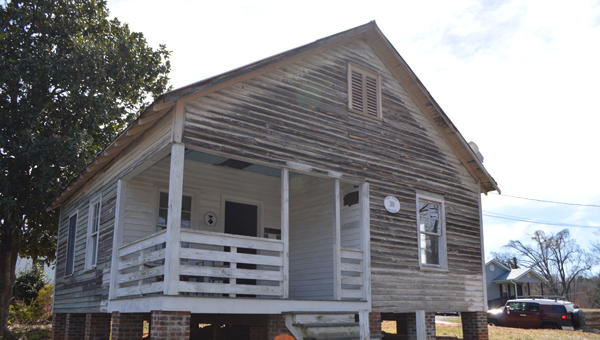 The house of Nina Simone, located at 30 East Livingston Street, Tryon was purchased by four artists. (photo by Michael O’Hearn)

TRYON-The birthplace of Tryon’s own Nina Simone has been purchased with new hopes that the historic home will be restored and not torn down for other development.

The closing of the sale occurred on Wednesday, March 1 with four artists getting together to purchase the house.

The house, located at 30 East Livingston Street just outside of downtown Tryon was purchased for $95,000. The house had been on the market since last year.

The owners have not yet said what their exact plans are for the home.

Simone, born in the house as Eunice Kathleen Waymon on Feb. 21, 1933, lived in Tryon until she was a teenager prior to going to school for music in Asheville.

She was born to John Divine Waymon, a dry-cleaning shop owner and mother Mary Kate Waymon, who was a Methodist minister. Simone first played piano in churches in Tryon’s eastside neighborhood and Tryon residents pooled money to give Simone piano lessons with Tryon’s Muriel Mazzanovich, whom locals called “Miss Mazzy.” Mazzanovich began teaching Waymon when she was 10 years old after the community noticed her talent.

Later in life, around age 25, Simone began playing and singing at a bar in Atlantic City and it was then she decided to change her name from Eunice Waymon to Nina Simone. The name Nina Simone not only sounded better than Eunice Waymon, but Simone also didn’t want her strict minister mother to know she was singing in a bar.

After a life of being known as the “high priestess of soul,” and a civil rights activist, Simone died at age 70 in 2003 at her home in France. The Town of Tryon later built the Nina Simone Plaza downtown that features a life-sized sculpture of Simone sitting at a piano.

The three-room house is 664 square feet and looks today very similar to how it would have looked in the 1930s.

The house was partially restored by former owner Kipp McIntyre. McIntyre did several restorations beginning in 2005 until he ran out of money and lost the house. The house had other owners a few years ago but was put back on the market last year. McIntyre had plans to turn the house into a museum. 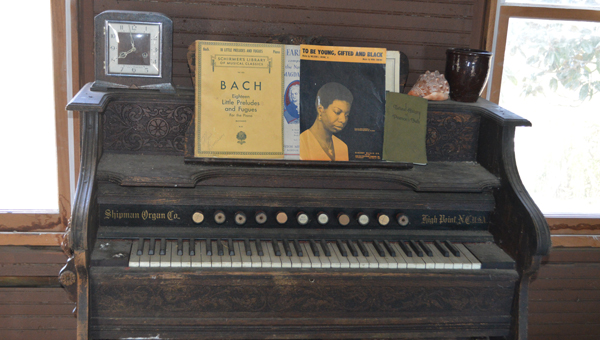 Inside the house is an organ and Simone’s sheet music. (photo by Michael O’Hearn)

Pendleton said the owners don’t have a blueprint for their ideas yet for the house but he thinks sometimes artists are the best people to deal with tricky situations, such as how to honor the legacy of someone as vital and complicated as Simone.

Cindy Viehman, with Foothills Reality in Tryon who sold the house, said it’s somewhat surprising to go outside the area for the buyer because they got phone calls from Charlotte, Atlanta and Asheville and the competition got heated.

“It gives Nina the notoriety she deserves,” Viehman said. “The house sold itself because it has its own feeling and history. It’s a preserved piece of history and the buyers have no plans to move it. It’s a tiny house, but if you think about how many people lived in it, back in the 1930s, that’s how it was.”

The house consists of three rooms with preserved memorabilia in it, including sheet music, an organ, beds and a cook stove. Simone was the sixth child born to her parents.

Tryon Town Manager Zach Ollis said Simone’s house is a huge piece of history that you can only hope will continue for many generations. Ollis noted Simone’s large number of fans and said the town has to do everything it can to accommodate those fans.

“We’re working on a mobile app, a walking app, that has bits and pieces of Nina’s life,” said Ollis. “We see people all the time who come to town and have never heard of Nina Simone and then they spend the day to find out about Nina. The town dynamic can change a bit and towns evolve every day. What the next generation experiences is going to be different and Nina is something we’re proud of and something we will showcase.”

“It’s thrilling and exciting for the community and a terrific opportunity for Tryon,” Kempton said.

Tryon Museum Director and former town commissioner Happy McLeod said having grown up in Tryon, she saw Nina at the Village Gate in New York City and “Nina cast a spell.”

“It’s a privilege to preserve her place and highlight Nina’s life because she was not just a musician but also a civil rights activist,” McLeod said. “I was concerned the house would fall into disrepair, but I am tickled to death.”

Local business owner Julia Calhoun said Tryon has a long history of attracting fascinating people and Tryon was the birthplace of the first civilian equestrian team.

“Nina started out at church singing and playing the piano and the only way I knew of Nina was because I took piano lessons with Miss Mazzy, the same teacher who taught Simone,” Calhoun said. “I was aware she had a really good student.”

Calhoun said it wasn’t until she was in college that she was aware of Simone on the national stage.

“I remembered her mother, and she was an enterprising lady here,” Calhoun said, “delivering eggs and butter and she was a hard working lady. When you’re aware of prominent people here, you refer to them as hometown folks.

Calhoun said because she works in historic preservation, at first she was terrified about Simone’s house, but now she is relieved.

Tryon Commissioner Dr. Crys Armbrust, who also led the Nina Simone Project for the plaza, said one would never guess Nina was from here and when his father told him Simone was born in Tryon, Armbrust called him a liar.

“I did my research and later apologized to my father,” Armbrust said. “I started the process of bringing Nina recognition and proposed the Nina Simone project.

“I am delighted about the purchase and would like to thank all four investors. I will absolutely not be nudging them in any certain direction but I am quick to say I am eternally grateful for them preserving an important piece of the fabric of American history.”

Armbrust said Ollis touched on the subject but we are the people we are because of the places that made us.

“Tryon made Nina Simone who she is and became and I am proud of that fact,” Armbrust said. “We’re a small community, one circular mile wide, but we produced Nina Simone.” 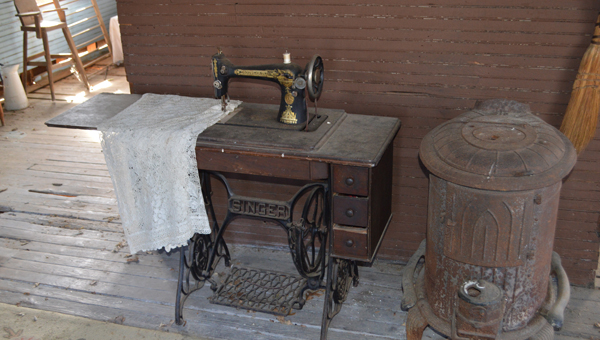 Nina Simone’s birthplace in Tryon was partially restored to how it would have looked in the 1930s. Replicas are located in the house, including an old sewing machine. (photo by Michael O’Hearn)