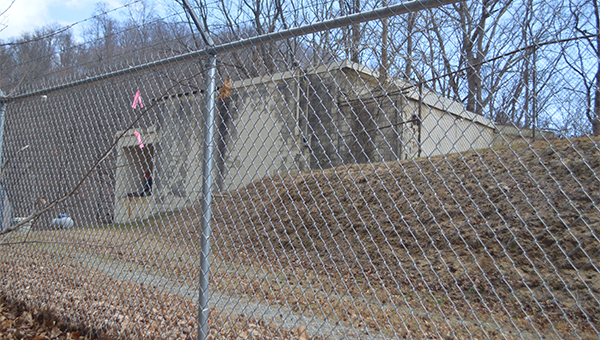 The Town of Columbus recently approved a $56,805 bid to demolish its old water plant that hasn’t been used for many years in order to place a new water tank on the same property, located on Overlook Drive. (photo by Michael O’Hearn)

COLUMBUS– The Town of Columbus approved a bid recently in the amount of $56,805 to demolish its old water plant in order to make room on the property for a new water tank.

Columbus Town Council met Feb. 16 and approved the low bid from Pace Construction out of Hendersonville out of three total bidders to demolish the building.

Columbus’ bid approval is contingent on the United States Department of Agriculture’s (USDA) approval as well.

The old water plant has not been used in many years. It is located on Overlook Drive, which is also the location of the town’s current water tank.

Columbus Town Manager Tim Barth said the town is constructing a new water tank because the current water tank is approximately 60 years old and if something were to happen to the tank, the town would be fully out of water.

Columbus is the only town locally that services its customers with water strictly from wells so no water plant is needed. The wells pump the water into the town’s storage tank and as the water goes through the wells the water is treated there. Barth said there is very little treatment to Columbus’ water. The water is pumped to the storage tank and then is gravity fed everywhere the town serves.

The demolition of the water plant and the construction of a new, 500,000 gallon water tank is part of an overall project, estimated at $2,068,000 that will also include a water line from the new tank connecting into the town’s system as well as sewer improvements downtown to get sewer out from underneath some of the buildings.

Following the construction of the new water tank and getting it tied into the system, the town will take the old water tank, also 500,000 gallons, offline and refurbish it in hopes of bringing the old tank back online to serve as a back up. Barth said the old tank will have to be drained and the town will send experts in it with lights to determine what needs to be done to refurbish it.