“Storm of the Century” crashes through Polk County

If you lived in the Foothills in March 1993, you remember the “Storm of the Century” that paralyzed Polk County for several days. Searching through the Tryon Daily Bulletin archives provides a glimpse into how the storm began, the havoc that it created, and tales of survival. 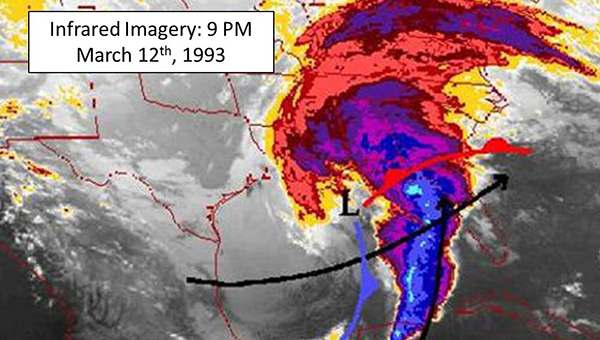 As reported in the Bulletin, the first signs of the big storm that descended on Polk County, 24 years ago, began Friday evening, March 12, 1993, when a Gillette Woods storm watcher noticed that his barometer read 30.6. This seemed quite high since the highest point is 31.5.

Before retiring, the storm watcher, who remained anonymous, mentioned, “I noticed there was a low over Texas, a low over North Carolina, and a low over or near Florida. A high, however, was reported in the Gulf Stream. I knew that if two of the lows came together, the result would be a severe storm. By the time I went to bed the barometer had eased and it seemed that the storm would go south of the Tryon area.”

The Bulletin reported Friday’s temperatures as a high of 69 and a low of 29. On Saturday morning, March 13, some snow started to fall but it didn’t appear to have the makings of a big storm. But at 11 a.m., when our weather follower checked the barometer, it read 28.4. This was lower than the 28.73 reading at the Greenville-Spartanburg Airport. (The lowest barometer setting is 27.5).

“When I saw that,” he reported, “I knew it was going to be a serious storm. It was the speed, 12 hours to have a drop like that. It explains why we heard the trees crack before we heard the wind. The more the drop and the faster the drop in barometric pressure, the more energy in the storm.”

All three lows met together in a storm field 1,000 miles long and 800 miles wide. The lows became a drain pulling the high into them and causing circular patterns of wind common to a cyclone, producing the “storm of the century.” But, as our weather watcher said, “It wasn’t a tornado because trees went down constantly from 11 a.m. into the night.”

Power poles snapped halfway up or higher. Pines too strong to snap were uprooted. Trees did not fall all in one way, but in every direction. Also unusual was the lightning and thunder that accompanied the snow.

Reading the vignettes printed in the Bulletin following the storm paints a stark picture of the devastated landscape and the difficulties that residents faced during and after the storm.

Reporting on the storm, the Bulletin noted that thousands of trees toppled off banks and hillsides all over the county, taking down utility lines to residences, businesses, water plants – virtually paralyzing the county and leaving residents in the dark and the cold.

Almost 500 people were housed at Polk County High School. Lunchroom manager Judy Moore, of Mill Spring, with the help of Caylin Case, Linda Case and Kyle Stepp, had the challenge of providing food and overnight shelter for motorists taking refuge at the high school, since I-26 was closed at the Columbus exit.

Karen Twitty also arrived at the high school to help. Columbus Police Chief Billy Stepp and Officer Chris Rome arrived with canned goods, drinks, and diapers from the Amoco station, the only place open in town. Sam Searcy donated blankets and carpet padding from his warehouse. St Luke’s had 11 blankets to spare and Jim Cochran found another four. This provided enough for 300 guests. A food line was set up and the last person was served at 11:30 p.m.

The county rose to the challenge of assisting those who were stranded. Along with the high school, people were housed by Columbus Baptist Church, Tryon Estates, and Tryon Theatre. Operation Hope and Landrum First Baptist helped provide food. Tryon Mayor Bob Neely helped haul wood, food and water to neighbors.

Even 911 was temporarily out of order. Kate Larken, a Tryon resident asked her neighbor, Richard Fink, to call 911. A huge oak tree had crashed through the roof of her home on Pine Crest Lane. But according to Fink, the man who answered the phone said, “I’m sitting here in the dark and can’t do anything but take incoming calls.”

Another report reads, “Around 1 p.m., neighbors gathered in a house with a tree through the roof to move furniture out of the weather. When they emerged, three more trees were down in just that yard.”

Dick Wright came to the assistance of Mary Wright Green. A fir tree smashed down on her porch and a large branch came to rest on her bed. Luckily, she was in the kitchen at the time. The description continues, “Dick made many visits during the night to make sure there were logs in the fireplace while Mary slept cozily on the sofa.”

The Saluda Truck Plaza at Exit 28 on I-26 became an oasis for motorists able to get off the highway. Earl Carswell described how the truck stop was constantly making coffee and was able to share food with about 200 people, many sleeping in their cars in the parking lot.

Terry Schager decided to experience the full effect of the storm of the century. “At the height of the blizzard, I dressed warmly and went out to stand on a knoll near my cabin. The northeasterly wind lashed ice and snow against my face,” he said. “And trees were falling all around. It was like being removed to another sphere.”

A compassionate thought was expressed by Phil Staggs. “I drove over from Landrum on Sunday to help repair fences on the farm. I was just thinking,” he said, “of the people in Bosnia. They have been in this kind of situation for months and months. Except that for them, there is no hope. When they burn that last piece of furniture, and eat the last scrap of bread, there is nothing else. If they should go out to look for more, if there were more to be had, they would run the risk of being shot.”

A Holbert Cove resident described “Things I Learned During The Blizzard” which included: flashlights won’t work without batteries, it takes three gallons of melted snow to flush a toilet, and you can use unleaded gasoline in a Coleman stove.

People who had a fireplace and could get to their wood, soon discovered that high winds often blew the smoke back into the room, adding to the misery.

At Cowan’s Grocery, Jim Cowan packed his cold food in the freezer, piling snow on top of it. He did lose all his fish, some frozen foods, and the ice cream.

Remember the “good ol’days”? Sarah Egerton of Silver Creek Road in Mill Spring said the storm was a reminder of how life was in Polk County before paved roads and telephone. “We filled the refrigerator with snow and didn’t open it for 54 hours. We confined life to one room and read aloud from Art Linkletter’s ‘Old Age Is Not For Sissies.’”

On Saluda, the Bulletin reported, “Saluda Mayor Nolan Pace and his wife had a wood stove but no wood. So they put on more clothes and stayed in bed.” Robert and Betty Lou Pace had 12 candles alight in one room.

Robin Lawter of Sunny View recalled, “I remember on Tuesday on Hwy. 9 near Giordano’s Little Farm, there was an orange fluorescent painted sign on a telephone pole, ‘Duke Power – Please Stop Here.’ I went by again on Thursday and there was a sign up which said ‘Thank You.’” After the storm, county offices were open again by late Tuesday, but much of the county was still handicapped from the storm.

As reported by the National Weather Service and Accuweather meteorologists, at its height, the storm stretched from Canada to Central America, mainly impacting the eastern United States and Cuba. Tryon reported 9.5 inches of snow. Even the Florida Panhandle reported up to 4 inches. Ten million households lost power. The cyclonic storm which had formed over the Gulf of Mexico on March 12 and dissipated in the North Atlantic March 15, was unique for its massive size, hurricane force winds, record low barometric pressures, storm surges and scattered tornadoes. While no deaths were reported in Polk County, more than 300 people were killed in the storm’s wide corridor of destruction.

As stated in the Bulletin, Charlie Ward summed it all up. “Taking care of your neighbor and doing what you could with what you had, was the theme that got us through.”

Clippings from the Tryon Daily Bulletin after the storm 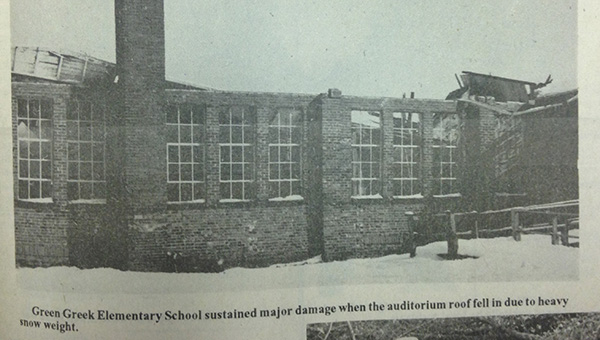 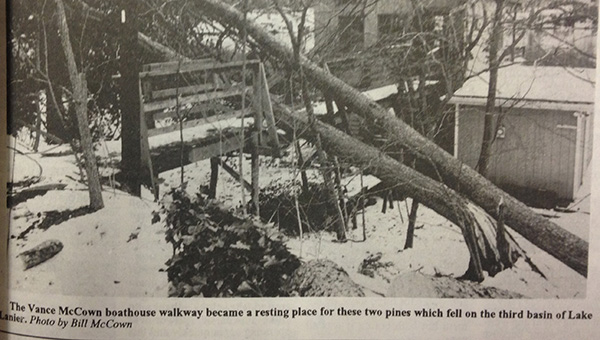 The Vance McCown boathouse walkway became a resting place for these two pines that fell on the third basin of Lake Lanier. (Photo by Bill McCown.)

Bob Witty, writing in his “Foothills Chronicle” column, described the storm rather poignantly.

March 13, 1993 – the day the Thermal Belt came unbuckled! We awoke to a rather pleasant, light snow blanket on Saturday morning and that was the last tranquility we were to enjoy for a week. The foothills of Southern Appalachia erupted with a fury unparalleled in memory. Hitherto stately pines were split and splintered and splattered over the torn landscape. Knocking out power and water lines, the tumultuous, unremitting wind devastated our area.

Thunder, lightning, and howling winds accompanied what sounded like the thundering and thumping of giant kettle drums (of the gods?). And when Sunday brought a bitter cold, sunny day, the realization of what had happened to us was shocking. Most homes and businesses were without power and water for several days as our “disaster” played out on a stage seemingly designed by some diabolical props department for a Wagnerian production. It was small solace, indeed, that the wind rating was “only 75 mph.”

But we coped. And other than some reprehensible acts by a few, the community came together, assisted one another, and began what will be a gigantic clean-up. And you can be sure that we will, for many years, hark back to the ’93 Blizzard as our very own benchmark – as in, “Where were you on Pearl Harbor Day?”