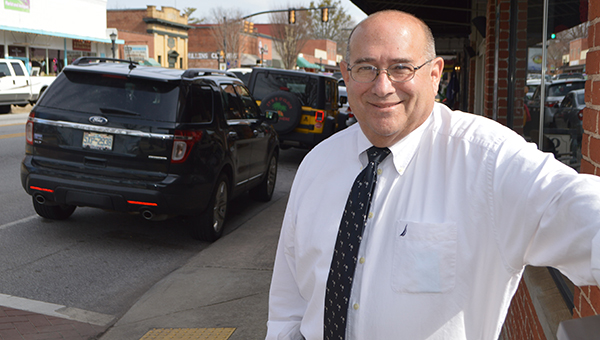 Rich Caplan was hired at a time when Landrum has been working on a comprehensive plan for the city for the next 10 years. The comprehensive plan outlines future needs, wants and projects for the city. Caplan said he admires the work done to restore the Landrum Depot, once a thriving train stop on the Norfolk Southern railroad that connects Landrum to Tryon and up I-26 to Saluda. (photo by Michael O’Hearn)

Rich Caplan was hired six months ago to lead and steer Landrum as its new city administrator. A California native, Caplan brings to small-town Landrum the mind of a consultant who has also been the city administrator for places like Simi Valley, Calif. and Vail, Colo. With a master’s degree in public policy and public administration from the University of California, Caplan was hired at a time when Landrum is in the process of adopting a comprehensive plan, deciding the future of the city for the next 10 years. He decided to become a city administrator in order to help shape and improve cities. He said he enjoys Landrum so far, with its bustling downtown area, beautiful scenery, and town character.

Q: Did you always want to be a city administrator and how does this differ from being a consultant?

A: Not necessarily a city administrator but I’ve always been interested in cities and always interested in government. When I was in graduate school, I learned a lot about what it takes to be a city manager and it seemed like sort of a good fit. What I like about cities, especially, is helping shape them and improve them. You have to deal with finance, personnel, trash collection — routine things that are important.  But what drove me here are the developments and improvements and making downtowns nicer, building subdivisions and bringing industry in. I’ve always enjoyed that and I’ve been lucky to work with good people.

With consulting, you have much more variety with the cities you work with and you’re not married to one city but you’re still with them at arm’s length.

What hobbies do you have?

I like to play tennis, ride my bike and I like the water, whether it’s in the swimming pool or at the beach. When my kids were younger, we would go sail boating. I love to sail. Between that and loving to travel, I’ve been fortunate to do that both personally and professionally. Now, with three kids, I’ve instilled that in all of them. They will go anywhere, any time, at the drop of the hat, which is great since I don’t pay for it anymore. They go wherever they want.

What’s the most exciting place you have visited? Have you been outside the country before?

A couple of years ago, I saw the Great Wall of China. There’s no way to describe it and pictures don’t do it justice. It’s amazing to see it. It’s fantastic. My wife has a checklist, actually, of places. I’ve been to more places than she has because of business. She has a list of places that are in the Northwest. A couple of years ago, we were up in Maine and we’d like to go back sometime. I’ll go all over the place. There are a lot of places I still want to go to and even places that are my favorite I’d still like to go back to. There’s just not enough time and money, and that’s all it takes. Since my son and his wife are in California, I get to go there twice a year. That’s my home, so it’s good. It’s always special to go home.

Branching off that, what are some of the major differences between Landrum, S.C. and California?

I think, professionally, on one hand California is more progressive in some of the projects and policies and programs they implement in local government. On the other hand, there are so many regulations from a business and government standpoint that your hands are tied to try and implement some projects and that really hurts because, in the last 20 years, it’s harder and harder in California for cities to do things.

I like local government because that’s where you get things done. Local and county governments are important.