HERD on a mission 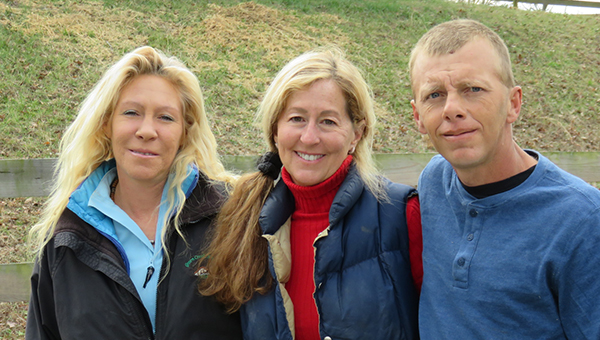 Written and photos by Judy Heinrich

When Heather Freeman’s farm helper, Charlie Petty, asked her to help him buy a horse that reminded him of one of hers, she couldn’t believe her ears. Not just because Charlie had never expressed an interest in getting a horse before, but because of where Charlie said he’d found the horse

“Charlie has his own cattle business and goes to the livestock auctions in the area,” Heather said. “He told me there was a man who was buying all the horses at the auctions so he could send them to slaughter for meat. Charlie had seen a young horse that reminded him of my horse, ‘Big,’ and he wanted to buy that horse back from the ‘meat man’ to save him from slaughter.”

Heather asked around and found out that Charlie was talking about a ‘kill buyer’ who used to send auction horses directly to slaughter but had recently altered his business. As Carolina Feedlots on Chesnee Highway, he started keeping some of the auction horses briefly to try and get them in a little better shape, and would then advertise that people could “bail them out.” The bail prices were a lot more money than he paid at auction, which would then fund buying more horses for slaughter. The ones that never had a chance or that didn’t get bailed out would be loaded on a truck for a crowded three-day trip to slaughterhouses in Central Mexico.

“When I went to that feedlot to find the horse Charlie wanted, it made me beyond sad, crushed, I could hardly breathe, to see all the horses standing knee-deep in mud waiting to be sent to slaughter,” Heather recalls. “My mother, Elaine Freeman, and I went in together to buy Charlie’s horse. He was a rack of bones, just skin and bones and parasites. We couldn’t bring him home with my other horses in that condition so we put him in an extra pasture Charlie had. We gave him to Charlie as a gift and he was renamed Superman.”

Once Superman was in good enough shape, Heather hired her own trainer, Stephanie Poole, to do some work with him. He proved to be safe under saddle, so Heather – a lifelong rider who used to show around the country on the A circuit  – began trail-riding him for conditioning and training.

As for Charlie, having succeeded in getting the horse saved, he decided he would be happy letting him go to a kind, horse-savvy home rather than learning to ride himself. So Superman is now with some good friends of Heather’s in Florida as the husband’s trail horse, and Charlie received the money they paid for him.

That sounds like a nice happy ending, but the story didn’t end there – in fact, it hasn’t ended at all. What started as one horse whose sad situation caught the right man’s attention has morphed into a rescue, rehab and re-homing organization, Helping Equines Regain Dignity (HERD). This is a completely volunteer-run effort right here in our Foothills. 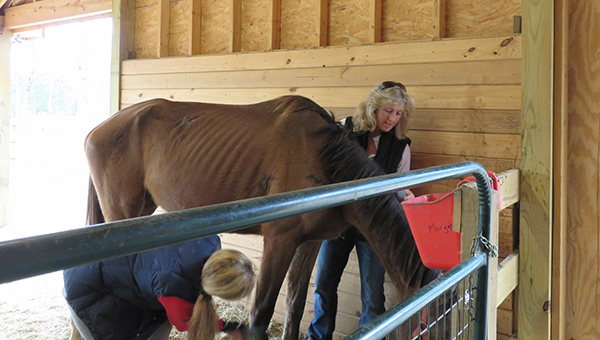 As heartbroken as Heather was about the condition the horses were in at the local feedlot, she was also surprised to see the potential that some of them would have if only given proper care, attention and a second chance.

She started watching Carolina Feedlots’ Facebook page and saw how many beautiful horses they got that would probably end up being shipped for slaughter. She decided to buy young ones two at a time, bring them back to health, give them some training, and then sell them to a good home at a price that would cover the rehab and training costs.

Her neighbor Sally Rock helped, and then others from their equestrian neighborhood of Fairview Farms and Golden Hills of Fairview started volunteering to help with the horses’ care or donating money. Several are experienced trainers who worked with the horses in Heather’s arena and round pen, or their own

As word spread about this good cause, neighbors with extra space started fostering horses, and one donated the use of a pasture and run-in shed. The biggest gift came when new neighbors Christian and Kim Oliver gave HERD the use of a three-stall barn with two pastures, now known as Edge Brewing Rescue Barn. While the Olivers’ own horses stay in a barn elsewhere on their property, their barn manager, Lisa Culberson, feeds, checks on and helps tend to the HERD horses at no cost to HERD.

While all of this was evolving and the group was succeeding at their mission of saving and rehoming horses, Heather was encouraged to apply for 501(c)(3) nonprofit status for HERD. With the help of Stuart Evans of Tryon and others, the application was approved in November 2016 and donations to HERD are now tax deductible. 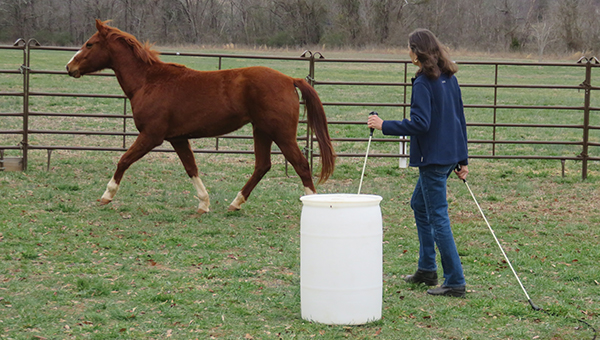 All HERD horses are started with ground training, as here with Elaine Jankins and KatieGrace.

A Different Kind of Rescue

There are many equine rescues that operate primarily as “sanctuaries,” with the intent of providing a lifelong home for most of the animals they take in. That’s a worthy service but it’s not the approach HERD takes.

“Our objective is to find young horses, primarily 2- to 5-years old, who have their whole future ahead of them. Then we get them rehabbed, healthy and trained, and move them into a new career in a perfect home,” Heather says.

“When you buy a horse from HERD, I will tell you everything I know about the horse – if it’s a little spooky about something, if it doesn’t like getting its feet picked,” she explains. “I don’t lie to anyone because I don’t want to get a horse back because it turns out not to be what you thought. And so far everyone who has bought a horse from HERD has been really happy.”

HERD has successfully rehabbed, trained and re-homed 84 horses to homes in our area and further afield between April 2016 and February 3, 2017 – an amazing accomplishment in such a short time. The price that a purchaser pays for their healthy and well-trained HERD horse covers its bail, rehab and training costs, and those sales proceeds fund additional rescues. Ongoing operating costs like feed, medications, hay, supplies, etc., are funded by tax-deductible donations.

Heather mostly watches Carolina Feedlots locally and Tarheel Feedlot in the Greensboro area for good potential rescue candidates. She has also helped horses she’s learned about from as far away as Oklahoma, Texas and Louisiana, getting them into rescue situations through some of the many contacts she’s made around the country.

Heather has a long-term commitment to HERD because she says the need won’t go away as long as people breed indiscriminately. “You’d be surprised that you don’t have to go very far from our own area and get on the back roads to find places where people just keep breeding horses,” she said. “They keep a stud horse on the farm with some mares and even young fillies, all getting bred. Many of the offspring end up unwanted and are just sent to auction. Others are registered Thoroughbreds that are coming off the track at the ages of 2 to 6 and being sent straight to auction.”

As long as there is no legislation to stop the indiscriminate breeding and subsequent slaughtering of unwanted horses, Heather says there will be a need for HERD. She’s proud of the work they do even though she recognizes that there are people who are skeptical of rescue organizations.

“I’ve had people say, ‘The kill buyers are making money on these horses. You’re just lining their pockets.’ That may be true but to the horse who’s been saved, made healthy, and adopted into a loving home, I can’t look any of these horses in the eye and say it wasn’t worth the effort.’”

Become one of the HERD

HERD is happy to have new volunteers help in any way, and is grateful for any tax-deductible donations to support the ongoing costs of giving rescued horses a second chance at a happy life.

For more information visit www.herdrescue.org or find them on Facebook. 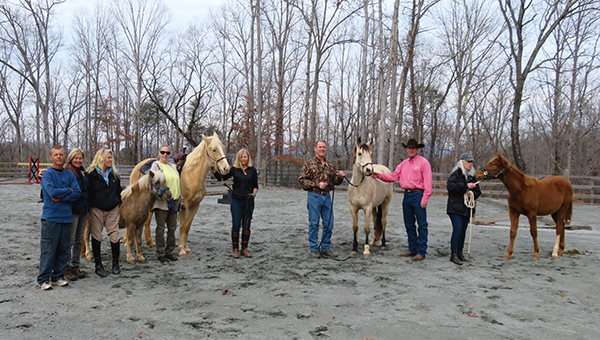 Just some of the volunteer trainers who help prepare HERD horses for new careers and homes.

While Heather Freeman was the driving force behind HERD and is now the 501(c)(3)’s president, she says the rescue couldn’t exist without its very active volunteers. Following are some of your Foothills friends and neighbors who are helping HERD in many ways.

Scott Homstead board member (and Heather’s husband) who updates the website, builds run-in sheds, trailers horses, and is a trained farrier who keeps HERD horses trimmed.

Kim and Christian Oliver Owners of Edge Brewing Company, donated use of a three-stall quarantine barn and two pastures, installed a new round pen for training, and bailed a pony and two horses.

Charlie Petty donates pasture space and feeds and cares for HERD horses on his own time.

Elaine Jankins fosters and does groundwork training with young HERD horses at her farm.

Stephanie Poole professional trainer who does initial riding evaluations and trains as needed before Heather takes over for trail riding.

Debra Carton works with mares and foals on socialization and donates treats and tools.

Rick Millweard does groundwork training, especially on horses that have never been touched.

Anne Swift foster, fundraiser, and promoter of HERD around the community.

David Carmichael helped with 501(c)(3) filing and advises on bookkeeping and finance matters.

Britt Woodall took the beautiful photos for HERD’s website; her photos of Ginger, Tuscany and Luna open the site.