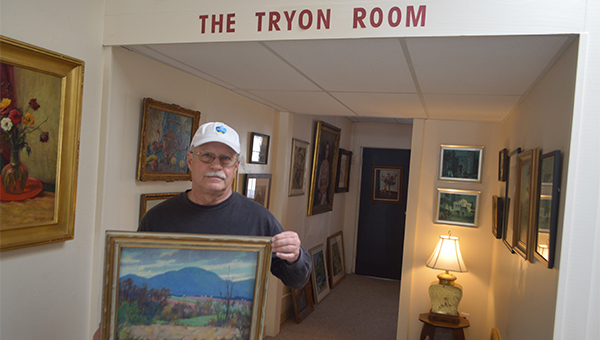 Nowell Guffey is working on opening a storefront for his Foothills Fine Art business at 94 N. Trade St. between Variety and Birdie’s Boutiques. (Photo by Michael O’Hearn)

TRYON – Following a 25-year career in the auto parts retail business, Nowell Guffey is working on opening a storefront for his art gallery at 94 N. Trade St. in between Variety and Birdie’s Boutiques.

Guffey is a Hendersonville, N.C. native who came to Tryon in 1972 and began to take an interest in the arts and antiques. He said he learned he had a good eye for art and began to dabble in the business on the side from home.

“I started making more money on accident in the art world than on purpose at my real job and, 20 years ago, I opened Foothills Fine Art,” Guffey explained. “I decided to open it at home because I didn’t want to be tied to a storefront and wanted to spend more time playing tennis. I also wanted to make sure my overhead didn’t put me out of business.”

Initially, Guffey would help people assemble collections of their own. As he began to get into the business he wanted to learn everything there was to know about the various artists.

Although he only spent a short time at A-B Tech in Asheville studying computers in the late 1960s, Guffey’s knowledge of art is a result of being self-taught, he recounted. Guffey has artwork from artists across the nation and can point out where each artist originated, from Chicago to New Orleans to California.

“I learned that local Tryon art history is intriguing to me and it’s amazing,” Guffey explained. “I wanted to learn more about these artists like their biographical info, where they studied, the exhibitions they have been featured in and their art memberships.”

The gallery features a room in the back known as the “Tryon Room” where Guffey will feature artists who have a connection to Tryon including Elisabeth Paxton Oliver and Lawrence Mazzanovich. Mazzanovich is the husband of Muriel Mazzanovich, singer Nina Simone’s music teacher, according to Guffey.

“I . I didn’t want to be tied to a storefront, but decided I should do it before I got older,” Guffey said. “It’s been fun and educational. I’m thankful for my auto parts career because it helped me interact with people and I learned the general idea of business.”

The Hudson River School art movement involving the earliest American landscape paintings is Guffey’s favorite style of art. He also has art on display from the impressionist, modernism and abstract modernism movements.

“The Hudson River School includes the earliest American landscape paintings from artists like Frederic Edwin Church,” Guffey explained. “I can appreciate all of this because artists go through cycles in their careers and some artists are happy with what they are doing and stay the same.”

Guffey said he and local art historian Michael McCue continue to look for more artworks by Tryon artists. He added that the two worked together on an art show in conjunction with the release of McCue’s book “Tryon Artists 1892-1942” in 2001. McCue is revising the 2001 publication and is working on a second volume incorporating Tryon artists from 1942 to 1992, according to Guffey.

Guffey’s gallery can also be found online at foothillsfineart.com and Guffey can be reached at 828-817-1711.