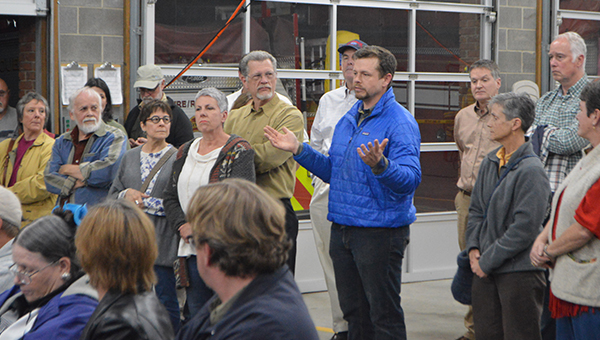 More than 100 local residents attended a Tryon Town Council work session on Tuesday, Feb. 21 to speak about the state’s plan to widen Hwy. 108 between Columbus and Tryon to four lanes. Everyone who spoke, including Jonathan Gerst, center, was against four lanes of traffic. (photo by Claire Sachse)

TRYON – Tryon Town Council had to move its meeting to the fire department after approximately 100 area residents came to a work session to voice their opinions on the state’s plan to widen Hwy. 108 between Columbus and Tryon to four lanes and a median.

Tryon Town Council met Tuesday, Feb. 21 for a work session and invited the public to come and speak regarding the state’s plan.

Tryon Town Manager Zach Ollis began the meeting by saying he and others met with the N.C. Department of Transportation (DOT) in January. DOT proposed the widening of Hwy. 108 but the plan is not set in stone. Ollis said the project will probably go another couple of years before they make a decision.

The proposal currently is on the state’s draft 2018-2027 State Transportation Improvement Plan (STIP) for 3.5 miles of Hwy. 108, including bike lanes, four lanes and a median. The project is expected to go from the roundabouts in Columbus to the Sunoco in Tryon and is estimated at $47,300,000.

Tryon Township resident Mark Byington said the plan goes back further than the rural planning organization (RPO). He said the plan was based on traffic volumes from 2003 and the cars per day have actually decreased since then.

“The bottom line is the numbers are skewed,” Byington said. “They were projecting the 2003 cars per day would have doubled and that’s not the case.”

Byington said the plan was to widen to make it a four-lane road.

“The reality is, it’s ludicrous,” Byington said. It’s a destruction of our whole community.”

He said the beauty is what brings people here and a four-lane highway through Lynn would destroy everything. He said there could be improvements, such as sidewalks and safety for bicyclists without “making it a monstrous no man’s land.”

Columbus resident Becky Oliver said she was at a meeting in 2008 when DOT officials were there and at the time people were discussing Foster Creek Preserve and residents did not want the widening then.

“I didn’t move to Hendersonville,” said Oliver. “I moved to Columbus and Tryon.”

Oliver said she’s not heard one person who wants four lanes and the DOT knew that in 2008.

Tryon Township resident Andy Haynes said he’s been a resident of the same property for 70 years and believes all of us think this is a quality of life issue. He said people drive downtown Tryon and say it’s such a charming community and he has spent time and money trying to make the entrance as attractive as possible right where “this ill-advised” widening would come.

“They (DOT) puts plans in the drawer and pull them out every 10 years,” said Burrus. “If DOT has that kind of money to spend on this they are over budget and we should write legislators to cut the budget.”

Robert Lange said, “If you build it they will come.”

“If they build more access to roads, more commercial development will take place on 108,” Lange said, adding that it will invite that traffic, and when you get to areas like downtown Tryon, you will just end up with a bottleneck.

Tamara Goodwin Reeves said she moved back here and loves it because it’s still so much the same as it was growing up.

Reeves said most residents don’t want it and quoted her father, Bennie Goodwin, as always saying, “If you move here you should know you will be behind slow cars because you are in ‘Poke’ County.”

Lynn resident Steve Collie said he has lived here the past eight years and the description of the plan reminds him of Hwy. 9 going through Boiling Springs (S.C.).

“And when I envision that, it just makes me sick,” Collie said.

Kim Clement said she is opposed to the whole thing in its entirety, including bike lanes. She said she’s witnessed many accidents and if a turning lane is put in people will use it as a passing lane. On a bike lane, Clement said people go fast and people are going to get hit. She said there are roads that haven’t been developed that could be used for pedestrians and bikers.

Lynn resident Olivia Whiteside said she is against this development.

“It will ruin the entire scape from the interstate to beautiful downtown Tryon and it would absolutely ruin the view and drive in,” Whiteside said.

Commissioner Bill Ingham said hopefully when DOT starts to do their measurements they will discover areas that don’t make sense. When talking about the cars that go through Lynn per day, 20 of those are his, said Ingham.

Tryon Mayor Alan Peoples said the best advice he can give residents is to make a lot of noise and write a lot of letters to Raleigh.

“If I tell them there’s 100 unhappy people here, that gets attention,” Peoples said. “The more the merrier.”

An audience member suggested people send postcards to Raleigh instead of letters, saying postcards will get read where a letter will not.

Ingham suggested someone make a postcard for people to send with a symbol such as a Hwy. 108 with a line through it so everyone sends the same card to Raleigh.

The DOT has said it plans public hearings regarding the STIP plan sometime this spring.

Editor’s note: Available for viewing on the Bulletin’s Facebook page is the live stream video of the work session.