The mountain of youth 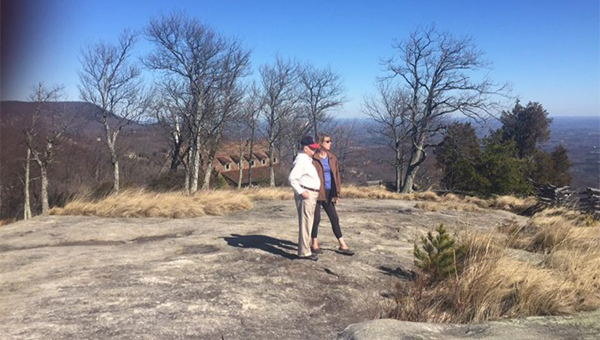 Pam and Junior on top of Glassy Mountain

My regular lunch date with Junior included Paul this past week as I had been giving him breathless descriptions of Junior’s daddy’s (we don’t say ‘father’) home place, seen from the pinnacle of Glassy Mountain, on the side of Hogback, easily visible through the bare, late-winter trees.

“You can’t believe how beautiful it is up there,” I had said, for the hundredth time, to Paul, as he was patiently trying to watch the end of a televised game. “And you can’t believe all the stories Junior tells about his family, so you have to go with us next time,” I added.

However, on the day that we met up at the crossroads of Highway 11 and 14, after Paul climbed into the back of Junior’s Crown Victoria, and I rode shotgun with Junior, Glassy began to weave her magic on my other half as we meandered up and around the mountain, after being allowed past the security gate so Junior could visit where most his family rest in the cemetery, near the summit.

“My daddy wouldn’t be happy with this at all,” Junior murmured, as we passed the impressive golf course and tasteful, expensive homes that graced either side of the road, “He’d say, ‘They done tore up my mountain.’”

He gave the obligatory, two-finger wave from his steering wheel upon passing each gleaming, imported vehicle that was coming the opposite way. They may have been residents or guest golfers, but I noted that none of them waved back. They looked as if they were thinking intently of other things.

My mind tried to imagine the mountain the way it was before it was sold (at fifty dollars an acre) and, of course, eventually developed, and it wasn’t terribly difficult. There still remain great swaths of unspoiled acreage and the view from the top is nothing short of thunderous: a 360 degree vista that contains Lake Robinson, Paris Mountain, over in Traveler’s Rest, Hogback…

“My momma used to lay down a quilt she sewed on top of this rock,” Junior pointed out to both Paul and me as we departed the car and stood, rooted, in the same place as his 70-year-old memory, at the pinnacle. “She’d pack us a lunch and all ten of us kids would sit on that quilt, right here, and have a picnic.”

He touched Paul on the shoulder and pointed north. “And that’s where a bunch of fellas pushed a Model T Ford over the top. They charged everybody five dollars a piece to watch and my daddy, who was only making fifty cents a day, paid that five dollars and he said it was worth every cent.”

“Is the car still down there?” Paul asked, astonished.

“That was pretty dangerous,” I remarked.

“I sure wouldn’t do it,” Junior agreed.

Glassy began to vibrate to life beneath my feet with the ghosts that inhabited each story. As beautiful as the homes are, as elegantly as the mountain is developed, I couldn’t help but feel a little sorry for the residents who aren’t aware of the rich tapestry of history that seeps from each bend in the road. I felt sorry for those who didn’t wave back when we passed them in Junior’s Ford.

You’re missing so much. You’re missing the chance to stand on top of that rock, where the quilt would be laid, and take in the rocky slabbed side of Hogback to your left, which marks the home place of Junior’s father. It was from that place where the body of his grandfather, John David Plumley, who died in 1913, was “toted by hand” with dogged determination, and quiet dignity, up the old, rutted, wagon track that led the way to Mountain Hill chapel and cemetery, where he rests to this day. A distance just under a couple of miles.

No one has told you about the killing that took place at the summit by a far removed cousin, Sheephead (“‘cause he had a big old head”) in a bungled robbery. Sheephead didn’t pull the trigger, but he was an accessory to the crime and did his time in prison, in Columbia, before being let out on parole.

“Arnold give him a job at the sawmill but he said he had too many bosses and was tired of being told what to do, so he took himself back to the prison and said he wanted to move back in, and they let him”

“Is he still alive?” I wanted to know.

“Nah, somebody killed him with an icepick.”

There were all kinds of characters that haunt the land beneath your tires, I thought, as we passed another resident, this time in a navy blue BMW, as we descended. Coming around a bend, Junior pointed out “Knothole number one,” where fellows could get away from their women and play cards and drink their corn whiskey just off the side of the road. Quite literally, perhaps the original ‘man cave.’

Knothole number two is across the road, up over the hill, and through the woods. And nearing the bottom, if you’re willing to climb over and around some rocks, there’s a spring that comes out of the ground where you can still take a drink of pure, mountain water.

It just seems a little sad not to have been told about Sheephead and Red, Buck, or Bullwhip (“but if you called him Bullwhip, he’d fight you”), as well as Pockets, who had a trading post and was so called because his wife sewed pockets onto his trousers that reached down past his knees, “’cause she wanted to make sure he kept every penny on him so it wouldn’t get stole.”

“Bet you could hear him coming,” I said.

There’s so many more stories, all true, all richly worthy of repeating as an oral legacy for which these mountains are renowned. So slow down a little. Go ahead and wave back at the elderly gentleman in the baseball cap that passes you every now and then as he takes another good look at the mountain of his youth.

Maybe even stop and ask if he’ll be so good as to give you a tour of your own home.