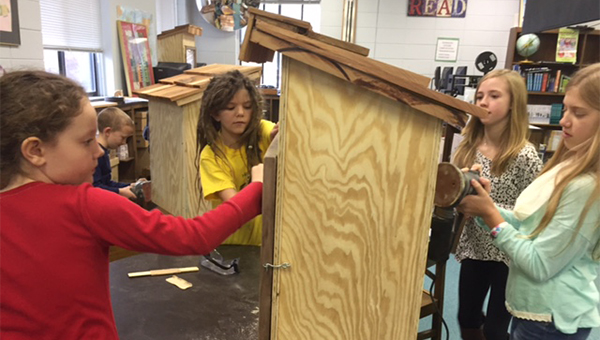 Saluda School students work on little libraries, which will be located throughout Polk County, in Mr. Burnett’s reading group. The little free lending libraries are the result of a partnership between the Polk County Public Library, which funded the materials, volunteer Frank McNutt, who constructed them, and Saluda School students, who are pre-finishing them and will paint two for the Saluda area. The teen group at Saluda Community library are also working on pre-finishing several of the libraries. The students working on this project are Zetta Anderson, Arianna Wood, Joshua Cannon, Savannah Barnwell, Maggie McCammon, Charlie Jackson, and William Garrison. (Submitted by Kevin Burnett)