Columbus faced with another erosion problem on Case Street 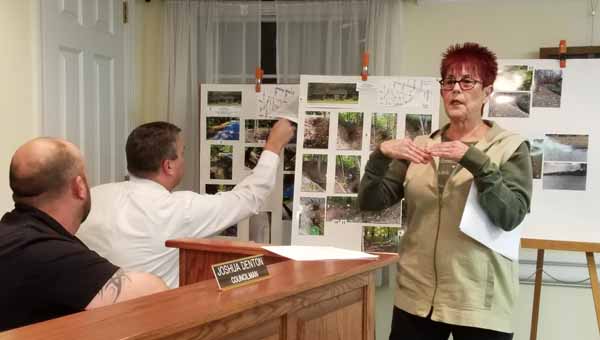 Linda Stevenson, a resident of Case Street in Columbus, told council last week about an erosion problem on her property. She brought pictures and showed council the problems runoff water is creating on her property. (photo by Leah Justice)

COLUMBUS – Case Street resident Linda Stevenson approached Columbus Town Council last week with a land erosion problem on her property she says is being caused by runoff from Holly Hill Drive since 2009.

The town has recently settled another erosion problem on Gary Street, where the town has agreed to dig a ditch and pave a portion of the road, which was dedicated to the town in the 1970s.

Columbus Town Council met Thursday, Feb. 16 and heard from Stevenson, who also brought pictures of the issues on her property.

Sevenson said the town has helped in the past by placing pavement curb along Case Street in front of her property but the problem persists.

She said rainwater drains down Case Street from Holly Hill Drive on the pavement and right side of the road. There is a culvert, she said, under the road at the bottom of the hill to direct the water coming from properties on the other side of the road but that is not the main source of the runoff during rains.

Stevenson also told council there is also evidence that there is underlying erosion going on with the pavement from the top to the bottom of the hill, so repairs are also needed there as well to that portion of Case Street.

Stevenson spoke of a hole that has been created and said an engineer at one time told her it would cost $40,000 to fix.

Columbus Town Manager Tim Barth said he contacted a specialist who said the only place the town may seek assistance is the Polk Soil and Water District. Barth said he is trying to get in touch with the local office to see if they can come and look at the issue. Polk Soil and Water has in the past worked closely with the United States Department of Agriculture (USDA), who has helped fund stream restoration projects in the area.

Stevenson said even if the stream is restored someone needs to figure out how to stop the water flowing down from Holly Hill Drive.

Columbus Mayor Eric McInyre and councilman Mark Phillips said they would visit the property to see the issue. McIntyre thanked Stevenson for bringing the issue to council and said the town will address it as soon as they can.

Columbus also discussed another erosion problem last week on Gary Street in the Holly Hill subdivision that council has been discussing for months.

Council discovered the entire 50-foot easement is town-owned so any part of the road is public and anyone will be able to walk on the road.  The town originally decided to pave an 8 by 165 foot section of the road as well as dig a ditch to fix the erosion problem there.

Last Thursday, council discussed the possibility of paving a 16 by 165 foot section in order to allow state Powell Bill funding to pay for the paving. Powell Bill monies require a road to be at least 16 feet wide. Council came to a consensus last week to dig the ditch first and get new bids after the ditch is in and come back to decide how wide the paving needs to be. Town employees said crews could start on the ditch within the next couple of months.