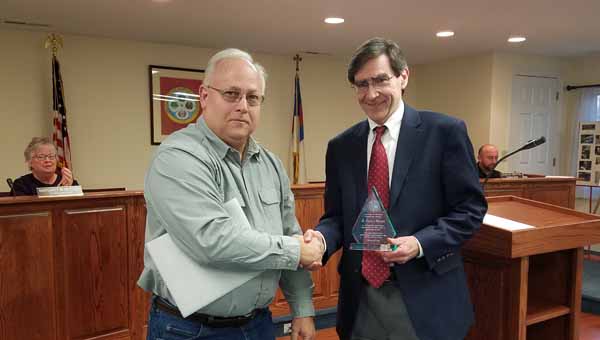 Columbus Mayor Eric McIntyre presented outgoing town attorney Bailey Nager with an award for his service on Thursday, Feb. 16. Nager resigned as the town’s attorney after serving since 2006. Columbus hired Lora Baker as its new attorney. (photo by Leah Justice)

COLUMBUS- The Town of Columbus and City of Saluda have new attorneys.

Columbus, Saluda and Tryon had attorney Bailey Nager until he announced his resignation to all three towns last year, and the towns have been searching for attorneys since.

Baker agreed to a rate of $125 an hour to work for Columbus. Columbus Town Manager Tim Barth also said Baker will be able to get future increases as she gains experience. Columbus also agreed to pay for any necessary training and traveling expenses for Baker related to town business.

Berg also serves as the Polk County Board of Commissioners’ attorney.

The Town of Tryon has not yet hired a new attorney. Tryon has advertised, but has not yet announced who will replace Nager. Tryon meets tonight, Tuesday, Feb. 21 for a 6 p.m. work session and a 7 p.m. regular meeting.

The Town of Columbus thanked Nager for his years of service with the town and presented him a recognition award for his service during last week’s meeting.

“He helped the town be successful,” said McIntyre. “You have been so good for us and helped us keep ourselves out of messes, so thank you so much.”

McIntyre also thanked Baker and welcomed her to the town.

Baker thanked commissioners for their vote.

Baker began employment with the town on Friday, Feb. 17.