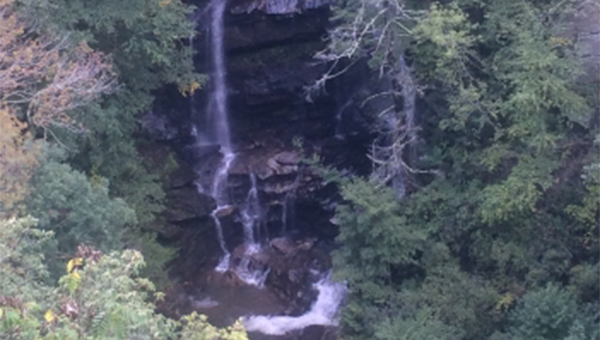 SALUDA – After yet another deadly fall at Big Bradley Falls in Saluda on Sunday, Feb. 12, Saluda Fire and Rescue has asked the N.C. Wildlife Resources Commission (WRC) to place barriers in the area to prevent further falls.

Saluda Fire and Rescue Deputy Chief Zach Pace emailed Isaac Harrold, N.C. Wildlife program manager with the WRC, on Monday following the death of a Charlotte man Sunday afternoon, who fell over 100 feet from the top of the falls and died.

“I wanted to bring something to your attention that has been an issue for a long time,” Pace wrote. “I’m not sure if you’re familiar with Big Bradley Falls in Polk County, but it has been the location of many fall injuries and fatalities in the past due to the steep, rugged terrain.”

Pace said the falls are located along Cove Creek on the Green River Game Lands off Holbert Cove Road in Saluda and just Sunday, his department responded to a body recovery for a man who fell over 100 feet off Lookout Rock.

Lance Konstants Healy, 47, of Charlotte, was hiking with his two daughters on Sunday, when he lost his footing as he stepped down to Lookout Point for a better view. Hikers in the area attempted to provide medical care until emergency personnel could reach him but he was pronounced dead once emergency responders arrived.

The Polk County Sheriff’s Office said emergency personnel, sheriff’s office deputies and local fire departments responded Sunday and set up an incident command for the rescue. Family members were notified of the accident and arrangements were made for Healy’s children until the family arrived. The fall occurred around 4:50 p.m. and Healy was transported to St. Luke’s Hospital around 10:40 p.m. following the rescue.

“Big Bradley is known for beautiful waterfalls and miles of hiking trails,” said the Polk County Sheriff’s Office in a release following the accident. “It is also known for its dangerous terrain. Since 2000 a total of eight people have reportedly fallen from the high cliffs. Out of the eight reported falls only one person has survived.”

Zach told WRC of Healy’s death in his email.

“Last May we responded to another fall victim with serious injuries in a location near the top of the falls,” Pace continued. “Thankfully, the N.C. HART team assisted us with rescuing the patient with their Blackhawk helicopter and he made a full recovery.”

Pace was referring to Cody Barra, 20, of Moore, S.C. who fell from Big Bradley Falls on May 9, 2016. It took rescuers about seven hours to extract Barra after hikers found him that afternoon. Barra was estimated to have fallen approximately 50 feet.

With crews rescuing people from falls at Big Bradley about once a year, caution signs were placed in the area several years ago with some clearly stating people have died from falling.

“I would like to know if the state would consider putting up some fence or cable in a few areas where people normally fall,” Pace asked WRC. “Currently there are warning signs along the trail that state how dangerous the area can be, but that hasn’t really helped prevent any falls.”

In 2012, rescue workers recovered the body of Jesse Pauge, 24, of Saluda from the bottom of Big Bradley Falls. Rain and storms had been in the area at the time and the rescue effort began at night and had to continue the next morning. Rescue efforts in the area include a 30-minute hike and rappelling.

In 2008 a N.C. Division of Forest Resources employee died after falling while working a fire in the area. Curtis Jessen, 32, suffered critical injuries after falling at least 50 feet from Big Bradley Falls.

Pace said the WRC has responded to his request and he is meeting wildlife officials at the site on Monday, Feb. 20 to discuss what can be done.