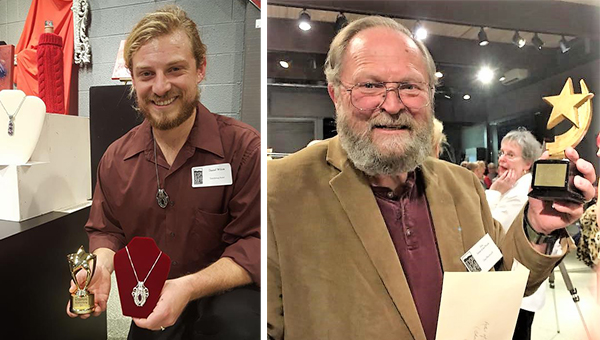 Tryon Arts & Crafts School (TACS) kicked off February’s “award season” with an award show of their own. Their Artist of the Year show, which opened on Feb. 3, featured a red-carpet entrance with interviews by Kai Elijah Hamilton (who also designed the show) and video by Kirk Gollwitzer of the Polk County Film Initiative. The show will be open through March 17 at 373 Harmon Field Rd. in Tryon.

The opening also featured hors d’oeuvres inspired by a combination of the artists’ favorite foods, such as cacio e pepe bruschetta inspired by Patti D’Arbanville’s favorites, cheese truffles inspired by Shelley Sperka, beef tenderloin rolls with blue cheese by Jim Weitzel, and all catered by Shanna and Marc Cwynar.

Attendees had the opportunity to vote for artist of the year, best supporting artist and best original artwork and the awards were announced by officials of other local Tryon galleries. The Artist of the Year Award was presented by Christine Mariotti, president of Tryon Painters and Sculptors, to Don Blackwell, TACS’ artist of the month for July.

The best original artwork award (a tie) was presented by Michelle Fleming, marketing director of the Tryon Fine Arts Center, to David Edgar for his Hammer-nosed Tide Feeder and Jim Weitzel for his Dare to Soar sculpture.

Five galleries competed for Polk County Gallery Show of the Year including Tryon Arts and Crafts School for their Black and White Show, Tryon Depot Room for Monica Stevenson’s Horse of a Different Color, Tryon Fine Arts Center for Preserving African-American Art in the Foothills, Tryon Painters and Sculptors for their Winter Show and Upstairs Artspace for their Clay Four Ways.

The public was urged to vote for their favorite online at tryonawards.org. Voting closed on Feb. 2. The award was presented by Beau Menetre and Kirk Gollwitzer from the Polk County Film Initiative to photographer Monica Stevenson (and Michele Deudne) for her exhibition, A Horse of A Different Color Show, at the Tryon Depot Room.