Can you help me with Landrum history?

Recently I wrote a column that focused on Landrum’s antebellum white house with the columns, located on N. Trade Street. It stirred my curiosity to learn more of Landrum’s history. After trips to the local library, plus a trip to the Spartanburg library, I’ve learned that there’s not much written past the time period of the very early days in Landrum. 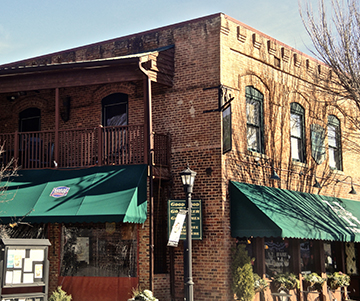 The Hare and Hound Restaurant was originally a mercantile store

Most of the knowledge that I’ve discovered comes from a book called “The Who and Why of Landrum” by James Walton Lawrence, Sr., the original publisher of The News Leader. The book was published in 2000 and in his preface, he describes the difficulty he had in finding much written after 1900. After spending many evenings pouring through his little book, I have gained some information.

It’s fairly common knowledge that the town began when the train started coming to Landrum and the depot was built. If you read my story about the white house on Trade Street, you know about the murder that took place the day the first train arrived, June 12, 1877, and the depot was opened. The murder of James Ledford, a man known to aggravate moonshiners, overshadows the history of an auction that was the beginning of the town of Landrum.

Mr. Lawrence provides some information about this event. At that time, much of the land surrounding the depot was owned by John G. Landrum. Landrum and a brother-in-law, Oliver Perry Earle, had 47 lots platted and surveyed, most contained a half acre. Rutherford Street already existed. These new lots were formed around what became known as Randolph, Trade, Greenwood, and Shamrock streets. The lots were auctioned off the day that first train arrived in Landrum.

As I continue my reading in Lawrence’s book, I learn that prior to 1900, two large hotels were built in Landrum. The first one was know as Jackson House and was owned by Perry Jackson. It was located on the site occupied by the present day Medical Group of the Carolinas. Mr. and Mrs. A.M. Forster opened the Imperial Hotel and Dining Room on North Shamrock Avenue. Eventually both hotels were demolished.

Some of the big fires that ravaged what is now downtown Landrum, give clues to stores that once existed. One such fire occurred at night on May, 4, 1904. It destroyed Hampton Brothers store that was located at the corner of Trade and Rutherford. It might have been robbed and then burned to cover any evidence. The building was owned by Mrs. Paul Bomar. A brick building was built on the site and was known as the Bomar and Ezell building. For many years it operated as a general mercantile store. Still standing today, it’s the home of the popular pub and restaurant, the Hare and Hound.

One cold windy night in March, 1933, a fire destroyed the B.F. Thompson store. Thomson was also the town clerk and kept the town records in his store. They were all lost in the fire. The Thompson store was probably located where present day Operation Hope exists. If you are standing across the street, you can see how that building fills a gap between the taller brick buildings. Thompson moved his store down the street and opened where today’s Landrum Hardware sits.

An interesting chapter in the book is devoted to “The Well.” I found this especially intriguing since many of us drive over the well everyday. Before the turn of the century, a well was dug on Rutherford St. at its junction with Trade Ave. It was a source of water for local businesses and for those coming into Landrum with livestock to trade. Families in buggies being pulled by mules or horses found the well convenient for themselves and their thirsty animals.

Eventually more and more cars were being driven, plus the town installed a water system. The well was closed and paved over by the highway department. So next time you find yourself stopped in traffic at Rutherford and Trade, know that you’re probably sitting on top of the old well.

So now, my readers, I am turning to you for assistance. During the 1900s and through the 1950s and ‘60s, Landrum was a bustling town. My reference book offers information on families that grew up here, churches that existed through the years, and some of the industry that helped the town grow. But there is very little information on daily life, stores that operated on Rutherford, where people shopped for groceries, what they did for entertainment. I’ve heard various stories and would like to continue the history with some personal accounts.

Do you remember shopping for groceries at Cantrell’s Market? It might have been located where Mullin’s Cleaners is now. Or did you ever pick a banana off a bunch hanging in Belue’s Store, possibly in the building now occupied by Perry Ltd? Did you buy toys at Christmas from Heavner’s Dime Store? Where was it located?

My friend, Marlene Fisher, remembers the Daniel Company and McKinney’s Drug Store. Did you shop for clothing at Daniel’s? What other shops can you identify?

I’ve noticed a closed up, small building on Thrift Circle. “Thrift Market” is written on the side of the building. Could this have been Blackwell’s Market at one time?

Did you ever attend a movie theater in town or spend hot summer days at the old Brookwood Park swimming pool? Did you roller skate in the large store that is now Landrum Furniture and Antiques? What was the brick building the sits across from the present day fire department, on the corner of Shamrock and Coleman?

The history of the past years of downtown Landrum is tucked away in the memories of long time Landrum residents. I would like to continue this project of documenting life here, but I need your help. If you have stories to share, please contact me at my email address, lin17th@aol.com, or by phone to 864-457-2292. Be sure to leave your name and contact information.