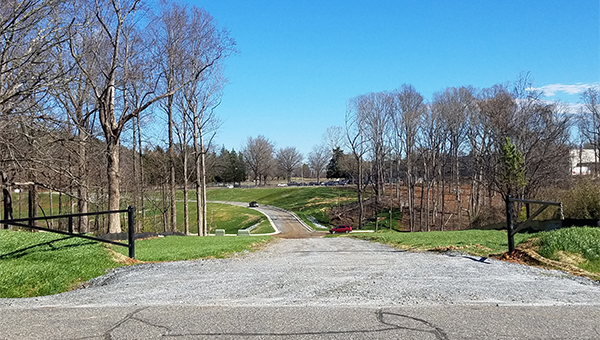 A view of the Park Street property following the removal of a house and two buildings. (photo by Leah Justice)

COLUMBUS – Polk County’s new law enforcement center is on schedule to be complete this December with the pouring of slabs expected to begin next month.

The house and two buildings on the Park Street property were demolished and removed about two weeks ago.

The Polk County Board of Commissioners met Feb. 6 and heard from county manager Marche Pittman about the construction progress.

Pittman said the contractor, Cooper Construction, has been on site for about seven weeks. Pittman told commissioners there has been exceptional weather and so far Cooper has only requested to be off for two days because of weather. Pittman also said he has a weekly construction meeting.

Commissioners recently decided to donate construction items from a historical house on Park Street that the county purchased as part of the law enforcement center property. Students in the construction program at Polk County High School removed items they could use a few weeks ago.

The county bid out the demolition of the buildings after not receiving any bids for the structures to be removed. Polk contracted with Holbert Landscaping to demolish the buildings and haul the material away, which occurred the week of Jan. 25. The county paid Holbert Landscaping $4,250 to tear down the buildings and dispose of them, and then another $1,800 after discovering a hand-dug well on the property that also needed disposal. Pittman said the well was four feet wide and approximately 40 feet deep.

Polk County purchased 19.19 acres of property adjacent to the Milliken plant just outside Columbus last year for $1,950,000 and another 2.6 acres off Park Street for $125,000 to construct a new jail, sheriff’s office and a future courthouse.

The purchase price included site preparation, including roads to be built with access both from Hwy. 108 near Milliken, and from Park Street. The Park Street entrance currently has a metal gate.

Commissioners approved a construction bid with Cooper Construction for $9,603,350.

The county also approved a project budget ordinance for $13.5 million for the new law enforcement center. The county will pay for the project through a loan, with the N.C. Local Government Commission (LGC) already giving its approval. The county plans to pay for the loan through a series of tax increases. Polk approved a two-cent property tax increase this fiscal year and plans to approve another two-cent increase next fiscal year and presumably another two-cent increase the following fiscal year for a total of six cents.

Polk County conducted a study of its current jail and future needs by hiring Moseley Architects, which is also the architect who designed the new law enforcement center.

The current jail was built in the early 1970s, with some commissioners and officials saying it was too small to begin with. The current jail has been said by county officials to be functionally obsolete and has not been able to meet state guidelines for years, including for jail fire safety.

Blood drive set to take place at Steps to Hope