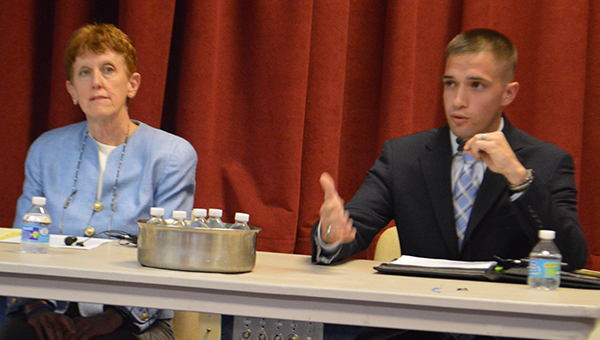 COLUMBUS – A forum was held at Tryon Estates Wednesday night, inviting NC House of Representatives District 113 candidates to talk to community members and residents at the retirement community.

The forum was moderated by Rev. Tim Willis, chaplain at Tryon Estates, and was organized by Bob John, a resident of Tryon Estates. District 113 encompasses Polk and Transylvania counties, and part of Henderson County. Both candidates are from Transylvania County.

In her opening statement, Copelof said she never thought she would be coming to the constituents of her district to ask for their support as a politician. Her background is in the Navy, retiring at the rank of captain after a 30-year career.   Copelof said she is a graduate of the University of South Carolina with an undergraduate degree in religious studies and a master’s degree in business administration.

Copelof said this is the first elected position she has run for. She added she has worked on the Transylvania County Planning Board for the last three years, which she said has been “invaluable” in reaching out to all communities in the county. Copelof said child poverty is her top issue, adding that one-fifth of the district’s children live in poverty.

A Marine Corps reservist, Cody Henson, in his opening statement, said he is running for the seat because the mountains of the district have been home to his family for generations. He added that he and his wife live in the “best place in the world in western North Carolina,” but said it is becoming increasingly harder for other families to do so.

Henson said he has never run for office before or dealt with politics. He said he thinks the district needs someone who has never been in politics and has a fresh perspective. Bringing the power back to local schools to create a good education system is his first priority.

Copelof said she is a proponent and supporter of the Second Amendment, adding she has spent her entire life around weapons. Copelof said “common sense legislation” would not infringe on a person’s right to own a gun. Background checks, training for gun owners and biometric controls on weapons, where only the owner’s fingerprints can unlock the weapon, are stances Copelof said she supports.

On HB2, otherwise known as the “bathroom bill”

Copelof said this bill is “bad legislation,” and stated the bill has hurt the people, reputation and economy of the state. She said more than $400 million in business has been lost as a result. She said the state should “admit it (the bill) was a mistake” and added that good legislation does not get passed in 12 hours.

Henson said he supports the bill and added men have no place being in a woman’s restroom or shower. He called the political backlash of corporations in response to the bill “hypocritical” and said the bill passed in Charlotte to take signs off the bathrooms is unconstitutional.

On refugees and immigrants coming into North Carolina

Henson said there is no way of knowing how many terrorists and refugees are coming into North Carolina, saying the Department of Homeland Security and the Federal Bureau of Investigation cannot properly vet those who are coming in.

Copelof said getting the “correct balance” between maintaining the security of the people in the United States and dealing with being a country of immigrants is a “critical issue” to her. She added that, when it comes to Syrians and Muslims, it takes two years for them to be vetted by different agencies in the country and said once they are done with the process, they should be allowed in because half of them are children.

Henson said he does not support the expansion of Medicaid because he thinks the system is broken as it is now. He added that expanding this system would create a “status quo” that would fail patients and taxpayers.

Copelof said she supports the expansion of Medicaid because of the social benefit of having 400,000 low-income people receive access to healthcare who did not have it previously. Tax dollars are already paying for expanding Medicaid, according to Copelof, and will create more jobs. She added she has spoken with hospital administrators in the three counties of the district and said they are in favor of expanding Medicaid because it helps low-income families and creates jobs.

Questions from the public

Dale Miller, resident of Tryon Estates, asked Copelof to clarify her comments about refugees coming into the country, and the vetting process of Syrians for 24 months. He said these refugees cannot be released into the public while they are being vetted because they can do a lot of damage.

Copelof said these refugees are not even allowed to enter the country during the process and they are vetted in camps before being allowed into the United States.

Miller then asked what happens with the refugees coming across the border from Mexico, to which Copelof said those refugees are not being vetted at all, but said it is a different category because it is illegal immigration and does not pertain to the refugees.

Anne Lindabury, another Tryon Estates resident, posed to both Henson and Copelof the question of what they think about wind farms and their impact on the Blue Ridge Mountains.

Henson said this decision comes down to what the people want across Western North Carolina and said if the people of Polk County do not want wind farms there is no reason to have them.

Copelof said a balance between listening to the desires of the people and determining where wind farms are appropriate needs to be found by legislators.

Final statements from the candidates

Henson said in his closing statement that he wants the mountain region to see some of the same economic growth urban areas of the state have seen.

Copelof said legislators should consider all voices and ask themselves if the law that is being passed will benefit their constituents. She said she is going into politics after a 30-year career in the military because she thinks the state can do better.