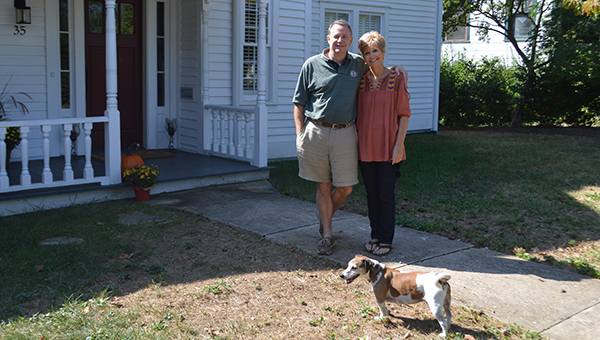 Robert Lange and his wife, Maureen, have been working with the Town of Tryon to create a historic district including Melrose Avenue, Melrose Lane and Melrose Circle. Their home, which is said to have been the first built on Melrose Avenue and is known as the Whitney House, sits across from the Tryon Fine Arts Center. Lange held an informational meeting on Monday, Sept. 26 for homeowners in the Melrose area to explain what a historic district designation means for them and tax credits involved for homeowners in the district. (Photos by Michael O’Hearn)

TRYON – Robert Lange of the Melrose Avenue Historic District organization held an information meeting for approximately 20 homeowners along Melrose Avenue and the surrounding area at Lanier Library Tuesday evening in preparation for getting a historic district designation from the National Park Service.

Lange, who lives on Melrose Avenue with his wife Maureen across from the Tryon Fine Arts Center, asked Preservation Specialist Annie McDonald and Restoration Specialist Jennifer Cathey from the state Historic Preservation Office to talk about what a historic district designation would mean for homeowners in the Melrose Avenue area and the tax credits for property owners in the district.

“This process will take a better part of a year to figure out the boundaries and how many properties will be included in the district,” Lange said. “We have just started to really understand what this means and are trying to get our hands around it, and we’re in the very early stages of trying to figure this out. There are currently 45 properties that are being researched so that we can create a narrative to present to the state that will hopefully be then presented in D.C. to the National Register of Historic Places.”

McDonald addressed the group of homeowners and explained the process of an area becoming a historical district in terms of “contributing” or “non-contributing” properties. She, along with Cathey, works in the 25-county western region of North Carolina, and the region’s office is based in Asheville.

In order for a district to be considered for placement on the National Register, a study list application has to be submitted to the State Historic Preservation Office. According to McDonald, the Melrose Avenue District has been on the study list since 1985.

“To a degree, I think Tryon owes its existence to the Spartanburg and Asheville railroad because of the need to stop here, to power up and make it up to the Saluda Grade,” McDonald said. “If it were not for the railroad, Tryon might have evolved very differently over the years, but that impetus led to the growth of the commercial area downtown and Tryon becomes increasingly like a destination.”

The district includes Melrose Avenue, Melrose Lane and Melrose Circle in Tryon and Lange added that he is still trying to define the boundaries of the district as he goes along in researching each property in this area.

“In recent years, several places in Tryon such as the downtown district, Tryon Country Club, et cetera have all earned their place on the National Register,” Lange explained. “There were even those that were added a long time ago like the Pine Crest Inn and the Bank of Tryon, the Block House and several others. One thing that is very important to understand is that this is an honorific designation, meaning there are no obligations or restrictions on what can be done with the property on the homeowner.”

McDonald outlined the four criteria used by state, federal agencies and the Secretary of the Interior for the consideration of being a contributing building to the historic district. Buildings that are home to events that have made significant contributions to history, are associated with the lives of people significant in local, state or national history, embody a distinct time period of architecture and will yield information important in history, are all factors McDonald said would be considered in the review process.

Cathey explained the benefit of tax credits to property owners in historic districts, explaining that owners and developers may receive a 20 percent federal tax credit and 15 to 25 percent state tax credit for certified rehabilitation expenses on historic structures.

Buildings that have been remodeled, reconstructed or are younger than 50 years old are considered to be non-contributing to a historic district, according to McDonald.

Suggested modes of preservation are also encouraged. For example, no sand blasting can be done on the building’s brick walls to take painted buildings back to its original design.

“You get the sense that this neighborhood was established by 1950, and there may be a few buildings that were demolished or rebuilt after this,” McDonald said. “The character is really what was established by the mid-20th century. This collection of buildings is what really gives the Melrose Avenue neighborhood its sense of place. It is very well manicured and largely intact with original materials and design and architectural character. It’s the long term preservation of these buildings by homeowners who understand and respect the history that is one of the reasons we have the National Register of Historic Places.”

For more information on the Melrose Avenue historic district project or attend the next meeting, contact Lange at 703-622-6413 or like the Melrose Historic District page on Facebook at facebook.com/melrosehistoricdistrict.