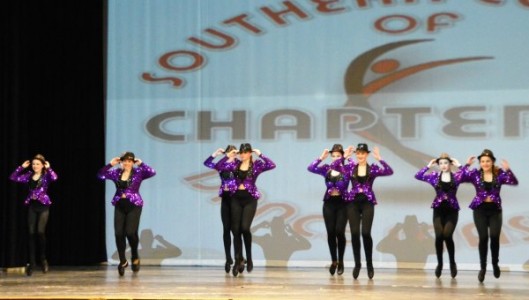 Also taking top honors, with her jazz routine “Cooler Than Me,” Makayla Cooper finished Overall Highest Score, all soloists 13 and over. Makayla also finished first overall in her age group, 13-14, and was awarded the Future Star Award.

Other top finishers were Caitlyn Cooper, first overall 15-16 Solo and third overall 13 and over solo, with her tap routine “Groove.” Caitlyn also received the Tops in Tap Award.

Emily Bartlett concluded her first solo competition finishing eighth overall, 12 and under, and winning the Fabulous Feet Award with her tap routine “Getting in the Mood.”

Platinum winners from the weekend included “Dr Jazz” for Bethany Smith, Tap; “Getting in the Mood” for Emily Bartlett, Tap; “Cooler Than Me” for Makayla Cooper, Jazz; “Swing with Me” for Nora Contreras, Tap; and “Groove” for Caitlyn Cooper, Tap.

All routines were choreographed by Missy Fincher, Alyssa Fincher and Katie Holbert. Each instructor expresses what an honor it was to have the highest scoring soloist of the day, in both 12 and under, 13 and over, and the highest scoring group 13 and over. “Our Competition Team works hard and has fun!  We are proud of each and every one.”

Missy Fincher is certified through Dance Masters by Test to Teach. Only Dance Master Members may compete. She is secretary of Southern Council of Dance Masters and owner of Dance Dynamics, dancedynamicsnc.com.

Thinking outside the box

No, the Saluda Forge in Tryon isn’t starting a deep-sea port in its driveway, but you might have thought so... read more