Our veterans who served our country: Theodore King 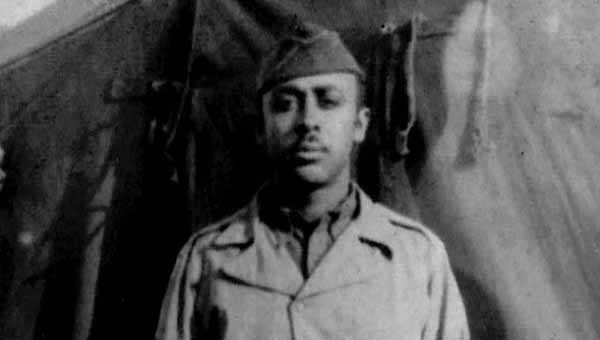 Editor’s Note: This special veteran is celebrating his 100th birthday this month and the community is invited to attend his party March 19. Details follow below.

Although many of our veterans did not get to complete their schooling, they had a chance to learn about the world while serving overseas.

Theodore “Ted” King was born in 1916 on a farm in Green Creek. The first son and the third of 11 siblings, he walked five miles to a one-room wooden schoolhouse in Green River. During harvest time, he stayed home to help out on the farm.

Back then, by the time you were 10 or 12 years old, you were considered old enough to work, and once he knew how to read and write and completed the sixth grade, he dropped out of school to run the family farm while his father, Frank, worked at the Spurlin Saw Mill. In 1942, at 26 years old, King was drafted to serve in the Army and sent to Fort Bragg, N.C.

“After six weeks of training at a base in Georgia, I took a long, long train ride to Boston Harbor where I shipped out to serve in Europe with the 319th Second Quartermaster Service Company on a British boat called the Sterling Castle. Some of the men on the train had already gotten off along the way to ship out on the Queen Mary from the New York Harbor.

“We landed in Liverpool, England and I spent the first 18 months on the English Channel stocking the daily boats to England and France. I was responsible for supplying the Army with whatever they needed on the frontlines to keep fighting. After that, I went to France and then on to Holland, where I kept up the fuel for the military tanks and built pontoon bridges for transport.

“Then I went to Germany to guard prisoners on the last offensive before sending our men home. I was engaged in three battles in Germany in the Rhineland Eastern Campaign at the Rhine River, earning two bronze service stars attached to my Eastern European Campaign medal. I also received a Victory and a Good Conduct medal for my service.

“While I was stationed in England and France, I experienced several black outs. I also got to see some of the cities and experience the local culture on my time off. The people were friendly and welcoming and African-Americans were allowed to fraternize with the locals in those countries.

“By the time I was sent to Germany, the living conditions were very poor. There were minimal food supplies and basic necessities. It was a very cold winter and hard to find wood to keep warm. Some of the men gathered coal dust when they could find it to burn in a pot at night for heat. Sometimes we would even pour gasoline in a bucket and ignite it just to get four or five hours of heat.

Serving in the military for almost three years, King reached the rank of Corporal before receiving an honorable discharge at the end of 1945. Returning to his wife Cora, who he had married in 1943, and his daughter Carolyn in Tryon, he went back to work at Oak Hall in January 1946. Working there as the dining room captain, he also started working at the Lake Lanier Tea House part time. When Oak Hall closed in 1979, he went to work at the Tea House full time until it closed when he was 89 years old and he finally retired.

To celebrate their father’s 100th birthday this March, King’s three daughters Carolyn, Jacqueline, and Anita, are holding an open house with cake and refreshments at Roseland Community Center on Peake Street in Tryon on March 19 from 2 to 4 p.m. Several representatives from the Polk County veterans Association as well as state and local government will be in attendance to honor Mr. King. Everyone in the community is invited to this free event. Your presence is the only gift necessary.