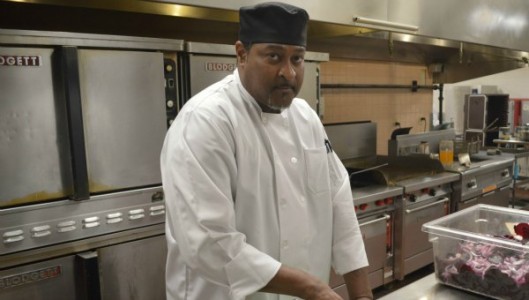 Rodney Harris is the new sous chef at Tryon Estates and has been with the retirement community since mid-January. Before coming to the Foothills, Harris worked as a personal chef for NBA and NFL players and has had a hand in nearly every flavor of restaurant imaginable in places like Charleston, S.C. and Bay City, Michigan. Now living in Rutherfordton, Harris’ new role as sous chef requires him to cater to nearly 600 residents at Tryon Estates on a daily basis.

Rodney “Chef Fresh” Harris has seen numerous kitchens and has worked in every restaurant you could think of. The 48-year-old North Carolina native has even been employed as personal chef for NFL and NBA athletes.

Now living in Rutherfordton with his wife Alicia, Harris has stepped onto a new field, playing the position of sous chef at Tryon Estates.

“I wasn’t seeking it, wanting to be a chef,” Harris said. “I just wanted to be a great cook.”

Harris started out in Atlanta as a barber stylist and personal chef working for football and basketball players like David Irons, Jr. of the Atlanta Falcons, his brother Kenny Irons of Auburn University and Scottie Pippen of the Chicago Bulls.

The Le Cordon Bleu College of Culinary Arts in Atlanta was Harris’ next step in 2006, but he did not fully finish his education there.

“I was kind of stubborn along the journey because I wanted to cut corners,” Harris said. “Going to restaurants was giving me an edge over where I was going to stay two years in culinary school.”

In 2008, Harris relocated to Charleston, S.C., with no personal connections in the city.

“I had to rely on my faith, and I started landing jobs there after a while,” Harris said. “I worked at this high-end position at the Isle of Palms and I ended up cooking right there. That’s when I started getting known down there.”

A meeting with a guy by the name of “Glover” put Harris on the right path in Charleston. Harris cites Glover as an inspiration and a counselor while he was in South Carolina.

“He was my in the closet counselor and I would go and sit with him all the time,” Harris recalled. “Times were rough and I was still seeking my way through after leaving Atlanta.”

It was through working with Chef Ben Berryhill at the Red Drum for a year that Harris found out where he needed to be. Berryhill inspired Harris to be more confident in his work.

“He said, ‘I know you know how to cook, but you’re lacking confidence,’” Harris said. “I was always questioning where I was in life. I found myself not being who I am as a chef.”

A cousin from Michigan contacted Harris through Facebook and he ended up relocating to Bay City, Mich. with only $134 in his pockets.

“I needed to take a 17 and a half hour drive to Michigan when gas was anywhere between $3 and $4 as you get closer to there,” Harris said. “I did not know how I was going to get there but I just took a leap of faith.”

Harris said he had seen a Greek restaurant in downtown Bay City with a “for sale” sign on it.

“I walked in, sat down and I asked for Ms. Donna and she comes out from the back and I asked why she was selling,” Harris said. “She said business wasn’t doing good and I agreed to work for her for eight hours a day for $30 a day.”

A realtor and his wife approached Harris at the restaurant in Michigan and Harris changed positions to be a personal chef for them.

“Being able to be in Michigan and not knowing no one and meeting Tommy was where my career began to change again,” Harris said. “I started the personal chef thing in Atlanta, but now I was going to bring it up there.”

Harris applied to BARTs, a restaurant owned by Arthur P. Dore, the man who started the “Tough Man” competition. Dore allowed Harris to bring his own personal flavors to the restaurant, which mainly incorporates southern barbecue.

“Arthur said he would have a truck backed up to the restaurant with whatever I needed to fulfill the menu I created,” Harris explained. “I had that menu done three days later.”

Three years ago, Harris’s father passed away at age 77 and Harris needed to relocate to Rutherfordton to be with his mother and family.

Harris worked as the executive chef at the Legends Club at the Tryon International Equestrian Center before transitioning to Tryon Estates.

“It was another divine intervention which I call faith on that day,” Harris said. “God has your interests from above and He gives you favors, and my name started coming up at Tryon Estates.”

Harris landed his new position at the retirement community in Columbus in mid-January.

“Tryon Estates is another part of my journey that I have been working so hard for,” Harris said. “I enjoy working with the residents. That’s another part of me seeing the knowledge they have obtained, and to render a service to them, is more sufficient to me than I could have ever imagined.”